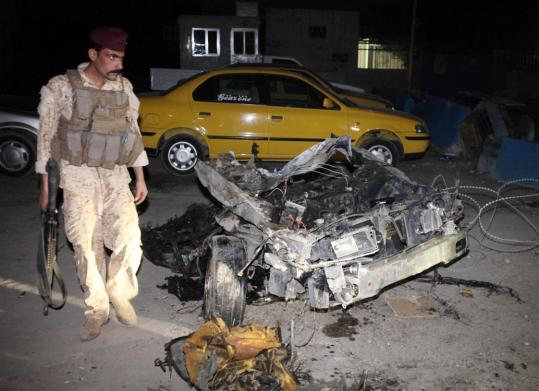 The attack — blasts in at least 13 separate neighborhoods — was clearly designed to hit civilians at restaurants and cafes where many Iraqis were gathered to enjoy the warm evening. The sophistication and the targets — Shi’ites — suggested that Al Qaeda-linked Sunni militants were responsible for the deadliest day in Iraq since May.

The strikes, two days after the bloody siege of a downtown church, were stunning in their scope — indicating a high degree of coordination from an insurgency that just a few months ago US and Iraqi officials were saying was all but defeated.

“They say the situation is under their control. Where is their control?’’ said Hussein al-Saiedi, a 26-year-old resident of Baghdad’s Sadr City, where 21 people were killed when a parked car blew up near a market.

“We were just standing on the street when we heard a loud noise, and then saw smoke and pieces of cars, falling from the sky,’’ Saiedi said. “People were fleeing the site in panic, frantically calling the names of their relatives and friends.’’

The bombings began at about 6:15 p.m. and lasted for hours. The assailants used booby-trapped cars and a motorcycle, roadside bombs, and mortars. Though 10 neighborhoods targeted were home to mostly Shi’ites, a couple of strikes hit Sunni communities as well.

In addition to the 76 dead, 232 people were wounded, according to police and hospital officials who spoke on condition of anonymity.

Fearing retribution for the attack, police on loudspeakers told people in the Sunni neighborhood of Azamiyah to stay home. In Sadr City, police ordered people to go home.

The surge in violence is raising fresh concerns about the planned pullout of American troops next year.

A State Department audit concluded yesterday that the Obama administration could be overstating what US diplomats can do to contain Iraq’s ethnic and sectarian tensions without US military forces.

The auditors also questioned whether American diplomats who remain behind will be adequately protected againstviolence, and their report faulted Washington for its planning of the transition from a US military-led mission in Iraq to one run by American civilians in 2011.