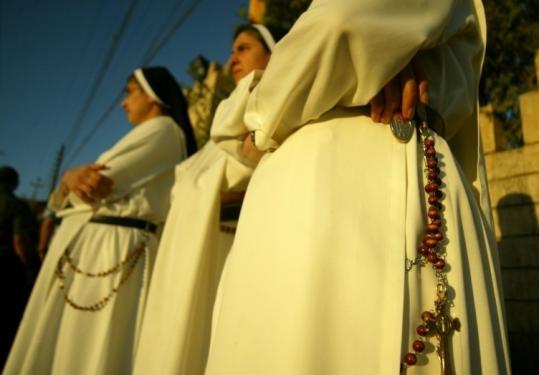 Nuns gathered in the northern Iraqi city of Erbil yesterday, the day after gunmen with grenades attacked a Catholic church in Baghdad. In addition to the deaths, 78 people were injured. (Safin Hamed/ AFP/ Getty Images)
By Barbara Surk Associated Press / November 2, 2010

BAGHDAD — Iraq’s dwindling Christian community was grieving and afraid yesterday after militants seized a Baghdad church during evening Mass, held the congregation hostage, and triggered a raid by Iraqi security forces. The bloodbath left at least 58 people dead and 78 wounded — nearly everyone inside.

The attack, claimed by an organization linked to Al Qaeda, was the deadliest ever recorded against Iraq’s Christians, whose numbers have plummeted since the 2003 US-led invasion as the community has fled to other countries.

Outside Our Lady of Salvation church, Raed Hadi leaned against the car carrying his cousin’s coffin, waiting for the police to let him bury him on church grounds. “We Christians don’t have enough protection,’’ he said. “What shall I do now? Leave and ask for asylum?’’

Pope Benedict XVI denounced the assault as “ferocious’’ and called for renewed international efforts to broker peace in the region.

Prime Minister Nouri al-Maliki also condemned the siege, saying it was an attempt to drive more Christians out of the country.

Islamic militants have systematically attacked Christians in Iraq since the collapse of Saddam Hussein’s regime, effectively chasing more than 1 million people out of the country, according to estimates from an adviser to Iraq’s top Catholic prelate, Chaldean Cardinal Emmanuel III Delly.

In an interview, the cardinal encouraged the country’s remaining 1.5 million Christians not to be driven off by the militants.

Sunday’s carnage began at dusk, when a deadly car bomb went off in the area. Militants wearing suicide vests and armed with grenades then attacked the Iraqi stock exchange, injuring two guards.

The attacks may have been an attempt by the militants to divert attention from their real target — the nearby church in an upscale Baghdad neighborhood.

The assault on the church soon followed. The gunmen went inside the structure and took about 120 worshippers hostage.

The dead included 12 police officers and five bystanders thought to have been killed by the blasts outside the church before the attackers stormed inside. Forty-one Christians inside the church also died, including two priests. Iraqi officials had initially provided a much lower death toll.

A statement posted late Sunday on a militant website, allegedly by the Islamic State of Iraq, appeared to claim responsibility for the attack. The group, which is linked to Al Qaeda in Iraq, said it would “exterminate Iraqi Christians’’ if Muslim women in Egypt were not freed.

Witnesses said hostages died both before and during the rescue. They described a terrifying scene in which they desperately tried to shield themselves from the violence.

One parishioner, Rauf Naamat, said militants began by throwing several grenades and spraying the crowd inside the church with gunfire. After the initial violence and chaos died down, the militants walked up to the priest celebrating the Mass, told him to lie down, and shot him, he said.

Naamat said he heard one of the attackers talking to what he thought was Iraqi security, threatening to blow themselves up if Iraqi forces stormed the building.

An Iraqi official said he had a phone conversation with a militant, who demanded that authorities release all Al Qaeda-linked prisoners starting with the women. The official said he judged by the militant’s accent and speech that he was not Iraqi.

When Iraqi special forces joined police and other officials already on the scene, they heard gunshots and decided to enter the church “to prevent the further loss of innocent lives,’’ said Lieutenant Colonel Terry L. Conder, a spokesman for US special forces.

The Iraqi official said that when the security forces stormed the church, the militants were shooting at the hostages.