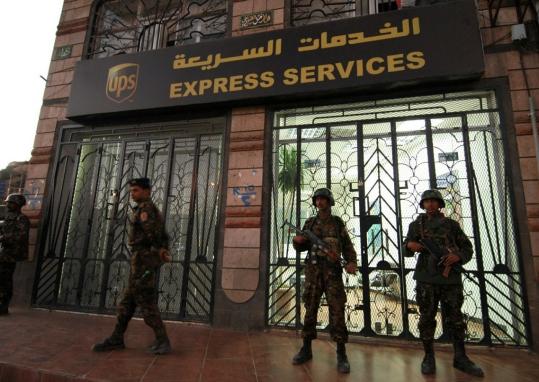 SAN’A, Yemen — Yemeni police have arrested a woman on suspicion of mailing a pair of bombs powerful enough to take down airplanes, officials said yesterday, as details emerged about a terrorist plot aimed at the United States that exploited security gaps in the worldwide shipping system.

Investigators were hunting Yemen for more suspects tied to Al Qaeda, and several US officials identified the terrorist group’s top explosives expert in Yemen as the most likely bomb maker.

The explosives, addressed to Chicago-area synagogues, were pulled off airplanes in England and the United Arab Emirates early Friday morning, touching off a tense search for other devices.

It still wasn’t clear whether the bombs, which officials said were wired to cellphones, timers, and power supplies, could have been detonated remotely while the planes were in the air, or when the packages were halfway around the world in the United States.

But the fact that they made it onto airplanes showed that nearly a decade after the Sept. 11, 2001 attacks, terrorists continue to probe and find security vulnerabilities.

British Prime Minister David Cameron said yesterday that he believes the explosive device found at the East Midlands Airport in central England was intended to detonate aboard the plane.

British Home Secretary Theresa May added that the bomb was powerful enough to take down the plane. A US official said authorities believe a second device found in Dubai was similarly potent.

She was held as part of a widening manhunt for suspects believed to have used forged documents and ID cards, Yemeni officials said. One member of Yemen’s antiterrorism unit said the other suspects had been tied to Al Qaeda.

The officials, like many in the United States, spoke on condition of anonymity to discuss the ongoing investigation unfolding on three continents.

Al Qaeda’s Yemen branch, known as Al Qaeda in the Arabian Peninsula, took credit for a failed bombing aboard a Detroit-bound airliner last Christmas. The bomb used in that attack contained PETN, an industrial explosive that was also used in the mail bombs found Friday.

The suspected bomb maker behind the Christmas Day attack, Ibrahim Hassan al-Asiri, is also the prime suspect in the mail bomb plot, several US officials said. Al-Asiri also helped make another PETN device for a failed suicide attempt against a top Saudi counterterrorism official last year. The official survived, but his attacker died in the blast.

“The forensic analysis is underway,’’ Obama’s counterterror chief, John Brennan, said Friday. “Clearly from the initial observation, the initial analysis that was done, the materials that were found in the device that was uncovered [were] intended to do harm.’’

Officials said the plot was discovered thanks to intelligence passed from Saudi Arabia. Without that tip, it’s unclear whether anyone would have discovered the bombs before they were airborne — or on US soil.

American officials do not get details about the contents of a US-bound cargo plane until four hours before it is scheduled to land. In the case of long distance flights, those planes would already be airborne. Once a plane lands, officials screen packages that they feel warrant a closer look.

The failed attack should be a wake-up call that the United States needs to step up security on cargo planes, said Kit Bond, the top Republican on the Senate Intelligence Committee.

US officials were still cobbling together details about the packages but one official briefed on the investigation said authorities believed the plotters may have been associated with two institutions — the Yemen American Institute (for) Languages-Computer-Management and the American Center for Training and Development.

It was not immediately clear whether those institutions even exist or whether that information came from false documents or fake addresses.

The United States temporarily banned all incoming cargo and mail from Yemen. A UPS employee in Yemen said the office has temporarily halted receiving any packages for delivery.

In Chicago, the leader of a North Side synagogue told members of his congregation at weekend services that a smaller congregation that uses their building was one of the targets of the plot.

Rabbi Michael Zedek of Emmanuel Congregation said he was told by a Jewish leader in Chicago that the Or Chadash congregation was targeted. The FBI did not confirm that, and both Zedek and Chadash Rabbi Larry Edwards said they had not spoken to law enforcement.

Or Chadash members took the news calmly, Edwards said. The synagogue, which has about 100 members, serves lesbian, gay, bisexual, and transgendered Jews and their families.

The White House said Brennan called Yemen’s president and made clear that the United States is ready to help the Yemeni government in the fight against Al Qaeda. The United States already assists Yemen with airstrikes and other counterterrorism support.

Yemen’s Al Qaeda branch is the most active of the terrorist group’s affiliates and has increasingly become the face of its recruitment efforts in the West. The country is home to radical US-born cleric Anwar al-Awlaki. He has been linked to the Christmas attack and has inspired other terrorists with his violent message.

Also hiding in Yemen is Samir Khan, an American who declared himself a traitor and helps produce Al Qaeda propaganda.

The Homeland Security Department said it was stepping up airline security, but White House spokesman Robert Gibbs said Americans did not need to change their travel plans.