Program was key to slowing warfare in Iraq 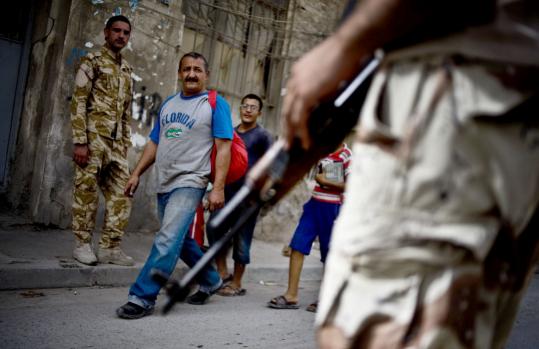 Iraqis crossed through a checkpoint staffed by a Sunni Awakening Council in Baghdad recently. Sunni defections from the program have accelerated since the inconclusive parliamentary elections, which left Sunnis uncertain of their political clout. (Ayman Oghanna/New York Times)
By Timothy Williams and Duraid Adnan New York Times / October 17, 2010

BAQUBA, Iraq — Members of US-allied Awakening Councils have quit or been dismissed from their positions in significant numbers in recent months, prey to an intensive recruitment campaign to rejoin the Sunni insurgency, according to government officials, current and former members of the Awakening, and insurgents.

Although there are no firm figures, security and political officials say hundreds of the well-disciplined fighters — many of whom have gained extensive knowledge about the US military — appear to have returned to Al Qaeda in Mesopotamia.

Beyond that, officials say that even many of the Awakening fighters still on the government payroll, possibly thousands of them, covertly aid the insurgency.

The defections have accelerated since Iraq’s inconclusive parliamentary elections in March, which left Sunnis uncertain of retaining what little political influence they have with the Shi’ite-led government and appear to have provided Al Qaeda new recruitment opportunities.

The loss of the Awakening members poses a new threat to Iraq’s tenuous social and political balance during the country’s ongoing political crisis and as the US military prepares to withdraw next year.

“The Awakening doesn’t know what the future holds because it is not clear what the government intends for them,’’ said Nathum al-Jubouri, a former Awakening Council leader in Salahuddin Province who recently quit the organization.

“At this point, Awakening members have two options: Stay with the government, which would be a threat to their lives, or help Al Qaeda by being a double agent,’’ he said. “The Awakening is like a database for Al Qaeda that can be used to target places that had been out of reach before.’’

The Awakening began in 2006, when Sunni insurgents and tribal leaders began turning against Al Qaeda and other extremists, and its support for the government proved pivotal in pulling Iraq back from deadly sectarian warfare. They were initially paid by the US military, with promises that they would eventually be given jobs with the central government.

But Awakening leaders and security officials say that since the spring, as many as several thousand Awakening fighters have quit, been fired, stopped showing up for duty, or ceased picking up paychecks.

During the past four months, the atmosphere has become particularly charged as the Awakening members find themselves squeezed between Iraqi security forces, who have arrested hundreds of current and former members accused of acts of recent terrorism, and Al Qaeda’s brutal recruitment techniques.

As part of the militants’ unusual, though often convincing strategy, Awakening members that Al Qaeda fails to kill are then sought out to rejoin the insurgency. They are offered larger paychecks than their $300 a month government pay and told that they would be far safer.

The government, which says it is trying to integrate the Awakening into broader Iraqi society, further angered the group recently by confiscating its weapons, saying Awakening fighters lack proper permits, and stripping some fighters of their ranks, which the government says were not properly earned. The pay of some Awakening leaders has also been reduced.

Iraqi officials in Baghdad say they are aware of only a handful of Awakening fighters who have quit recently and are unapologetic about the government’s treatment of the Awakening. “Fighting the Al Qaeda organization does not mean you are giving service to the government or to the people, and that you deserve gifts, rank, presents, or benefits,’’ said Zuhair al-Chalabi, head of the National Reconciliation Committee. “It is a national duty.’’

The Awakening has long complained about Iraq’s reluctance to hire more of its members into the Army and police, and about receiving salaries late. Those problems persist, they say.

As of July, less than half — 41,000 of 94,000 — of the Awakening’s fighters had been offered jobs by the government, according to the US Defense Department. Much of the employment has been temporary and involved menial labor. Only about 9,000 have jobs with security forces.

Leaders of the Awakening, who so far do not appear to be among those leaving, say they are not surprised about the defections given what they call the group’s marginalization by the government and its abandonment by the US military.