Dispute over tree led to exchange of deadly gunfire 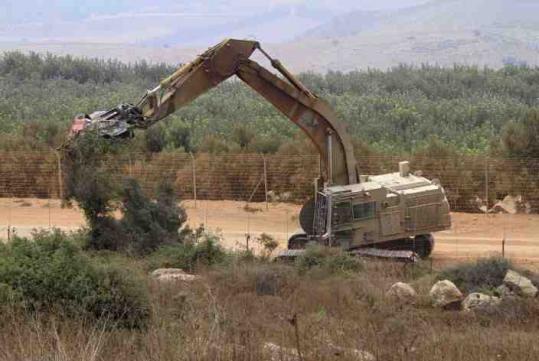 JERUSALEM — The UN peacekeeping force in southern Lebanon said yesterday that it had concluded that Israeli forces were cutting trees that lay within their own territory before a lethal exchange of fire with Lebanese army troops, largely vindicating Israel’s account of how the fighting started.

The head of peacekeeping operations for the United Nations, Alain Le Roy, also said yesterday that UN peacekeepers had tried to prevent the clash.

Israel told the United Nations at around 6:30 a.m. Tuesday that it was planning to trim a tree on a narrow strip of land the Lebanese believe should be on their side of the border, Le Roy said. The United Nations then informed the Lebanese, who objected. Le Roy said that his troops began negotiating between the two sides, but that Israel had decided to go ahead after a few hours, leading to a clash at around 11:40 a.m.

“We asked for more time for both parties to agree,’’ Le Roy said.

An Israeli commander, two Lebanese soldiers, and a Lebanese journalist were killed in the border skirmish, the worst clash in the area in four years. The border region was calm yesterday as Israel’s leaders appeared to try to cool the atmosphere, while also warning that Israel would always respond to attack.

Israel’s defense minister, Ehud Barak, told Israel Radio that the Israeli response to what he called a provocation by the Lebanese army had been correct and measured, and said there was a need to ensure that a local episode did not turn into a crisis.

Israeli citizens and vacationers in northern Israel were told to carry on as normal, and that there was no need for special precautions. Israeli forces completed their task of pruning brush in the area of the confrontation without incident, according to an Israeli military spokeswoman.

But the prime minister of Israel, Benjamin Netanyahu, issued a stern warning to both the government of Lebanon and to the Islamic militant group Hamas, blaming the latter’s military wing for the recent rocket attacks on southern Israel from Gaza, and on the Israeli resort of Eilat and the Jordanian resort of Aqaba from the Egyptian Sinai.

In a statement yesterday, the UN peacekeeping force said its inquiries were continuing.

“The UN established, however, that the trees being cut by the Israeli army are located south of the Blue Line on the Israeli side,’’ it said, referring the internationally recognized border.

The UN added that in the area in question, the Lebanese government had some reservations concerning the Blue Line, which was demarcated by the United Nations when Israel withdrew its forces from Lebanon in 2000, as did the Israeli government at some other locations.

But both sides committed themselves to respecting the line as identified, the UN peacekeeping force added.

The Lebanese army commander, General Jean Kahwaji, said yesterday that Israeli troops had entered a disputed area along the Blue Line, despite objections from the Lebanese army.

A Lebanese army spokesman had said Tuesday that Lebanon fired warning shots at the Israelis to urge them to move back, but the Israelis responded with artillery shells.

Mark Regev, a spokesman for Netanyahu, said the UN announcement “clearly corroborates the Israeli version that our routine activity was conducted in its entirety south of the frontier, and that the Lebanese army opened fire without provocation and without any justification whatsoever.’’

Each side had blamed the other in the hours after the gunfire, trading accusations of violating the UN Security Council resolution that underpins the four-year-old cease-fire.

A senior American said that the Lebanese military appeared to have been responsible for starting the gunfire.

Israeli military officials insisted that the attack on their forces was premeditated. They pointed to internal tensions in Lebanon and what they said was the growing influence of Hezbollah — the Shi’ite, Iranian-backed militia — on certain elements within the Lebanese army.

But Barak said yesterday that the episode had not been planned by the Lebanese general staff, and that Hezbollah was not a partner to it.