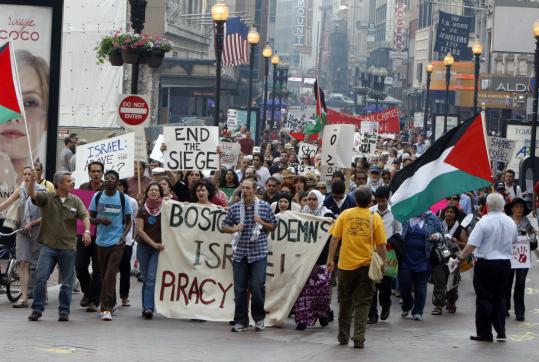 A Cape Cod man was awaiting word last night from his 28-year-old son, who was on board one of the flotilla of ships Israeli commandos stormed.

Brewster resident Joseph Bangert said an aide from Senator John F. Kerry’s office told him yesterday that his son, Fiachra Ó Luain, was “seriously injured’’ in the bloody confrontation between Israeli soldiers and pro-Palestinian activists aboard the ships trying to bring aid to the Gaza Strip.

But the aide did not have any further information. Bangert said that a YouTube video clip showed his son leaving the ship and that he appeared to be all right.

“At least I saw him walking with all his arms and legs,’’ Bangert said.

The video appeared to have been taken after the Israelis towed the flotilla of six ships to the port city of Ashdod in Israel. Bangert believes his son is in Israeli custody.

Bangert said he had not spoken with his son directly and had to rely on news reports and information posted on Facebook by people who were with him.

Another Cape resident, 63-year-old Katherine Elliot Sheetz of Woods Hole, was listed on a passenger manifest of one of the ships.

No one answered the telephone at numbers listed for Sheetz or her relatives.

A biography posted on freegaza.org, one of the organizations involved with the flotilla, said Sheetz is a registered nurse with a master’s degree in sustainable development who has been an activist for human rights, health, and food security, most often in Haiti.

Dozens of activists and six Israeli soldiers were wounded in the predawn confrontation, according to news reports.

At least nine people were killed.

The activists were headed to Gaza to draw attention to Israel’s three-year blockade of the Palestinian territory, which Israel and Egypt imposed against the territory of 1.5 million Palestinians in 2007.

Accounts of what happened early during the raid are conflicting, with activists saying the Israelis opened fire without provocation and Israel insisting its forces fired in self-defense.

Joseph Bangert, a retired Marine and Vietnam veteran, said he was preparing to go to a Memorial Day service yesterday when he heard the news.

He said he has been glued to the computer and news reports since, and is in shock.

Material from the Associated Press was used in this report. Donovan Slack can be reached at dslack@globe.com.