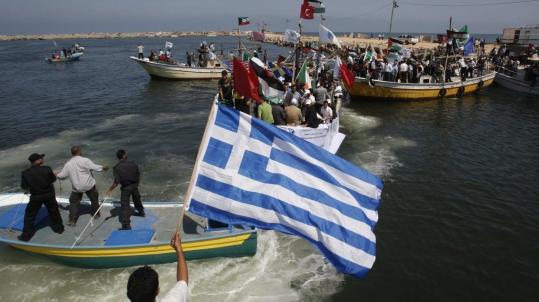 Palestinians supported an effort to move supplies into Gaza City as a flotilla of ships prepared yesterday for the task. Israel warned it would halt ships from reaching blockaded territory. (Hatem Moussa/ Associated Press)
By Tia Goldenberg Associated Press / May 31, 2010

HAIFA, Israel — Hundreds of pro-Palestinian activists, including a Nobel laureate and a Holocaust survivor, were bound last night for the Gaza Strip, edging closer to an expected naval showdown with Israeli gunships determined to stop them.

Confirming reports by an Arabic satellite service and a Turkish TV network, Turkey’s Foreign Ministry said today that at least 2 people were killed and more than 30 wounded in an Israeli raid on an aid ship. The ministry condemned the raid, calling it unacceptable, and demanded an “urgent explanation’’ from Israel. It said Israel violated international laws and will suffer consequences.

The Israeli military denied today that its forces attacked the boats but said it would enforce the decision to keep them away from Gaza.

However, other security officials, speaking on condition of anonymity because they were not authorized to report on the military operation, confirmed that activists were wounded, but did not give numbers.

The al-Jazeera satellite channel reported by telephone from the Turkish ship leading the flotilla that Israeli navy forces fired at the ship and boarded it, wounding the captain. The Turkish NTV network also reported an Israeli takeover with gunfire, and said at least two people were killed.

The al-Jazeera broadcast ended with a voice shouting in Hebrew, “Everybody shut up!’’

A Turkish website showed video of pandemonium on board one of the ships, with activists in orange life jackets running around as some tried to help an activist who was apparently unconscious on the deck. The site also showed video of an Israeli helicopter flying overhead and Israeli warships nearby.

The reports came just after daybreak, with the flotilla still well away from the Gaza shore. Israel had declared it would not allow the ships to reach Gaza.

Yesterday afternoon, Huwaida Arraf, one of the organizers, said the six-ship flotilla had begun the journey from international waters off the coast of Cyprus after two days of delays. She said they expected to reach Gaza, about 250 miles away, this afternoon, and that two more ships would follow in “a second wave.’’

The flotilla was “fully prepared for the different scenarios’’ that might arise, and organizers were hopeful that Israeli authorities would “do what’s right’’ and not stop the convoy, she said.

After nightfall, three Israeli navy missile boats left their base in Haifa, steaming out to sea to confront the activists’ ships.

The flotilla of three cargo ships and three passenger ships is trying to draw attention to Israel’s three-year blockade of the Gaza Strip. The boats are carrying materials that Israel bars from reaching Gaza, like cement and other building materials. The activists said they also were carrying electric-powered wheelchairs, prefabricated homes, and water purifiers.

This is the ninth time that the Free Gaza movement has tried to ship in humanitarian aid to Gaza since August 2008. Israel has let ships through five times. This flotilla is the largest to date.