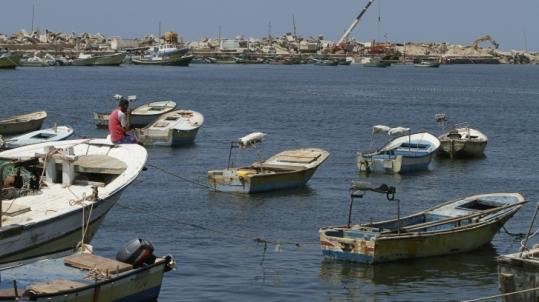 A Palestinian fisherman sat in Gaza City’s Mediterranean port Sunday. A small flotilla will try to break the blockade of Gaza. (Mahmud Hams/AFP/Getty Images)
By Karin Laub Associated Press / May 26, 2010

JERUSALEM — Eight ships carrying 10,000 tons of donated supplies and hundreds of pro-Palestinian activists yesterday were making their way toward blockaded Gaza — and a likely weekend showdown with the Israeli Navy.

The small flotilla carrying cement, prefab homes, and other goods marks the most ambitious attempt yet to break the border blockade of Gaza, imposed by Israel and Egypt after the Islamic militant group Hamas violently seized the territory in 2007.

Israel warned that it would not let the vessels reach Gaza, and has reportedly set up a detention center for the activists in the southern Israeli port of Ashdod. Israel also insisted there is no humanitarian crisis, saying that it allows sufficient supplies into Gaza.

The latest attempt to break the blockade comes at a time of growing appeals by the international community to Israel to ease the border closure or lift it. Israel bars everything except for basic foods and humanitarian supplies, in hopes of driving out Hamas or at least forcing the group to release an Israeli soldier it has held for nearly four years.

In Istanbul, Foreign Minister Ahmet Davutoglu of Turkey urged Israel yesterday to lift the blockade. Two of the eight ships were dispatched by a Turkish nongovernmental organization, and Davutoglu said his government has raised the issue of the aid shipment with Israel.

However, he emphasized that the aid convoy is a civilian initiative and that Turkey wants to avoid renewed friction with Israel. “We will of course use all diplomatic opportunities so that there is no problem,’’ he said. “We do not want new tension.’’

Israeli-Turkish relations cooled after Israel’s military offensive in Gaza more than a year ago, launched to halt Hamas rocket fire on Israeli border towns. Turkish NGOs have been among the most active since then in delivering aid to Gaza.

Four cargo ships and four passenger vessels were heading toward the southern Mediterranean yesterday from various European ports, and planned to meet Friday off Cyprus, said Greta Berlin, one of the organizers. From there, they are to set off together for the one-day journey toward Gaza.

Israel initially allowed several small ships to reach Gaza, but since December 2008 has blocked all vessels from reaching the territory. Among the passengers are lawmakers from a dozen European countries, a Holocaust survivor in her 80s, a Nobel Peace laureate, and a retired US Army colonel, Berlin said.

Foreign Ministry spokesman Yigal Palmor of Israel said the vessels would be blocked.

Palmor said Israel asked the flotilla organizers to use land crossings to bring in the goods, but alleged they are less interested in delivering aid than in “promoting their radical agenda, playing into the hands of Hamas provocations.’’

The organizers said they hope to deliver goods not permitted by Israel, but that they also want to draw attention to the blockade. “If we are being stopped, the world will see it on all the TV channels,’’ said activist Dror Feiler.

In other developments in the Gaza Strip, Palestinian hospital officials say 15 people were wounded in overnight Israeli air strikes. The strikes came after the Israeli military reported that Palestinian militants yesterday had blown up a donkey cart filled with dynamite near the concrete wall that separates Gaza from Israel and fired several mortar rounds into Israel. No Israelis were injured.

Officials at the hospital in Beit Hanoun in northern Gaza say 15 people, mostly civilians, were injured when Israeli warplanes targeted a Hamas training camp in the area.