Soldiers were heading to scene of deadly firefight 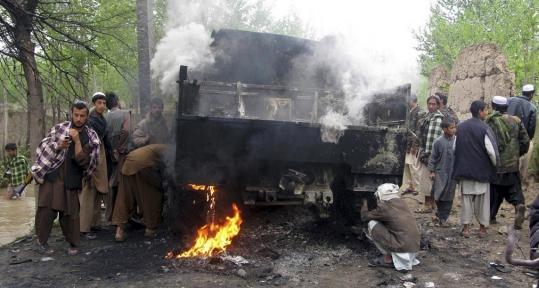 The friendly fire shooting Friday took place in northern Kunduz Province, where German forces were sharply criticized last September when they ordered an air strike on two tanker trucks that had been captured by the Taliban. Up to 142 people died, many of them civilians.

The German central command confirmed Friday’s shooting, but put the number of Afghan troop casualties at five. The deaths occurred amid heavy fighting between German troops and militants near Kunduz city.

The German military said its soldiers encountered two civilian vehicles about 7 p.m. and demanded that they stop. When they did not, a German armored personnel carrier opened fire on them, it said in a statement. The vehicles were later found to have been transporting Afghan troops and an investigation is pending, the military added.

Shortly before, German troops had been attacked while on a bridge-building and mine-clearing mission southwest of Kunduz city.

Kunduz provincial spokesman Muhboballuh Sayedi said Afghan commanders were meeting on Saturday with coalition forces to discuss the shooting. The Afghan Defense Ministry condemned the deaths of its soldiers.

Speaking during a visit to South Africa, German Defense Minister Karl-Theodor zu Guttenberg expressed sorrow over the friendly fire deaths and said German soldiers were doing everything possible to avoid such incidents.

Meanwhile in Kabul, Yunus Qanooni, the speaker of the lower house of Parliament, criticized President Hamid Karzai for a speech Thursday in which he blamed the international community for the vote fraud controversy over last year’s disputed presidential election.

Despite Karzai’s attempt at damage control, including a telephone conversation with Secretary of State Hillary Rodham Clinton, his allegations laid bare the growing mistrust between the Afghan government and its international partners as the United States and NATO increase troop levels to try to turn back the Taliban.

Karzai’s speech also heightened an ongoing political power struggle between Karzai and an increasingly independent-minded Parliament, which has refused to confirm nearly half of his Cabinet nominees because they were allegedly incompetent, corrupt, or too weak to resist pressure from powerful people.

During the speech, Karzai lashed out against the United Nations and the international community, accusing them of perpetrating a “vast fraud’’ in last year’s presidential election as part of a conspiracy to deny him reelection or tarnish his victory.

He also said foreigners were looking for excuses not to help fund the September parliamentary elections because they “want a Parliament that is weak and for me to be an ineffective president.’’

Karzai also suggested that Parliament members who threw out a presidential decree strengthening his power over the election process were serving foreign interests.

“This is the house of the people and all the members have been elected,’’ Qanooni told Parliament. “It’s not possible that we would be influenced by foreigners.’’ .

Other lawmakers also expressed outrage over Karzai’s remarks, which they considered a clumsy attempt to appeal to Afghan national pride that has been strained by the presence of thousands of foreign troops.