Makes her case at event with Netanyahu 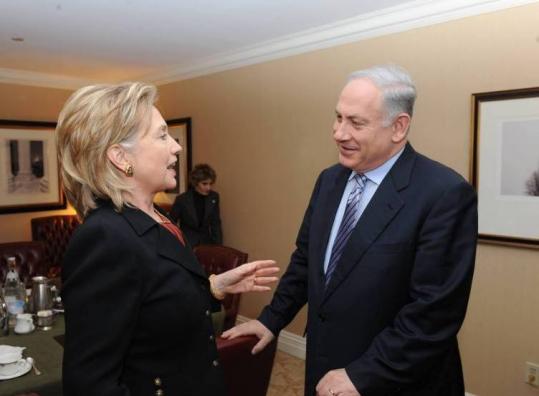 WASHINGTON — Secretary of State Hillary Rodham Clinton sought to dispel rising tension with Israel yesterday in a speech that reaffirmed the deep US commitment to Israel’s security while warning that Israel’s ongoing occupation of Palestinian land is “unsustainable on all sides’’ and costly to US efforts abroad.

“We cannot be blind to the political implications of continued conflict,’’ she told an audience of about 7,500 delegates to the annual conference of the American Israel Public Affairs Committee, a powerful pro-Israel lobby.

Hours later, Israeli Prime Minister Benjamin Netanyahu also underscored the unbreakable friendship between the two nations but remained unwilling to budge on the key issue — construction in East Jerusalem — that had caused the worst diplomat spat between them in more than 10 years.

“Everyone knows these neighborhoods will be part of Israel in any peace settlement,’’ said Netanyahu, in a prepared text of his remarks. “Therefore building them in no way precludes’’ successful talks.

The prime minister is scheduled to meet with President Obama today.

The crowd greeted Clinton warmly, giving her several standing ovations. Clinton took on the demeanor of an old friend at the podium, addressing AIPAC’s new president by his nickname and making a lighthearted reference to her daughter’s upcoming marriage to an American Jew.

But she also spelled out clearly why the Obama administration is pushing Israel — as well as the Palestinians and the Arab states — to make concessions for peace. She twice mentioned that the Israeli-Palestinian conflict undermines US interests in the region by strengthening Islamic extremists and weakening moderates. She said world leaders, even from countries far from the Middle East, constantly bring up the issue.

Clinton did not reiterate — but also did not apologize for — the tough rhetoric that she launched at Israel in recent weeks after Israeli officials announced they would build 1,600 more housing units in an ultra-orthodox Jewish neighborhood in East Jerusalem, an area that Palestinians hope will become the capital of their future state but that Israelis insist is now a part of Israel. The international community rejects Israel’s claim to that territory, which Israel annexed after their 1967 war with Arab nations.

The announcement of the new units came during Vice President Joseph Biden’s visit to Israel and just after Palestinians agreed to return to indirect peace talks, also known as proximity talks. In a diplomatic back-and-forth, Clinton called the announcement “insulting.’’

Yesterday, her tone was far softer, explaining why the Obama administration believes that restarting peace talks is essential and that those talks are built on establishing some level of trust among the participants.

“New construction in East Jerusalem or the West Bank undermines that mutual trust and endangers the proximity talks that are the first step toward the full negotiations that both sides say they want and need,’’ she said. “Our credibility in this process depends in part on our willingness to praise both sides when they are courageous, and when we don’t agree, to say so, and say so unequivocally.’’

It has been over a year since Israeli and Palestinian leaders negotiated face-to-face. In an interview last week, the Palestine Liberation Organization’s ambassador to Washington, Maen Rashid Areikat, said Palestinian leaders are reluctant to return to talks as Israel continues building on land that is a key focus of negotiations.

“Some people are saying ‘What is the big deal about expanding infrastructure?’ ’’ he said. “The big deal is that they are swallowing our land.’’

Netanyahu disputed this notion, saying in his prepared remarks, “We are prepared to take risks for peace [but] it cannot be a one-way street.’’

It was clear that much of the audience yesterday sided with Netanyahu’s view of construction in East Jerusalem. Moments before Clinton spoke, the audience jumped to its feet clapping when AIPAC executive director Howard Kohr declared: “Jerusalem is not a settlement.’’

Kohr’s speech about Israel’s future made only a cursory mention of millions of Palestinians who live in Israeli-occupied territories, focusing instead on how the US government must help Israel achieve international recognition.

Kohr said Washington must help Israel secure membership to the Organisation for Economic Co-operation and Development, a club of democratic economies, and a seat on the UN Security Council.

But in her speech, Clinton said it was the creation of a Palestinian state that would give Israelis “the recognition they deserve.’’