In Bethlehem, glow of holiday edges out gloom 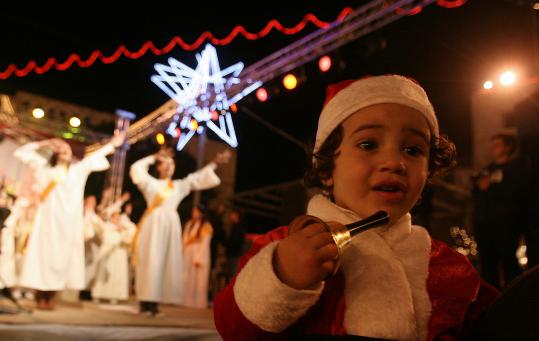 A girl attended Christmas Eve celebrations yesterday outside the Church of the Nativity in the West Bank city of Bethlehem. Residents, still recovering from years of violence, celebrated their town’s annual day in the spotlight along with tourists. (Musa Al-Shaer/AFP/Getty Images)
By Dalia Nammari Associated Press / December 25, 2009

BETHLEHEM, West Bank - Thousands of pilgrims from around the world descended on the traditional birthplace of Jesus yesterday, greeted by choruses, scout troops, and rock bands for the most upbeat Christmas celebrations this Palestinian town has seen in years.

But the Holy Land’s top Roman Catholic clergyman reminded followers that peace remains elusive, while the threat of sectarian violence in the Islamic world and the lava spilling from a volcano in the Philippines clouded the celebrations for other Christian communities across the globe.

Bethlehem residents, hemmed in by an Israeli security barrier and still recovering from years of violence, celebrated their town’s annual day in the spotlight along with tourists who came from across the globe. Visitors milled around Manger Square, mingling with clergymen, camera crews, and locals hawking food and trinkets.

Christmas in Bethlehem has its incongruous elements - the troops of Palestinian boy scouts who wear kilts and play bagpipes in one of the town’s holiday traditions, for example, or the inflatable Santa Clauses hanging from church pillars and storefronts looking out of place and overdressed in this Middle Eastern town with not a snowflake in sight.

Hanna Pioli, 23, and her sister Katherine, 25, were spending the holiday far from their hometown of Salt Lake City.

The sisters miss celebrating a “white Christmas’’ at home and were taken aback by the warm weather, Katherine Pioli said, but still thought Bethlehem was the best place for Christians to spend the day.

Jeffrey Lynch, 36, a sanitation worker from New York, was taking a tour through the Church of the Nativity, the fourth-century Crusader era structure built atop the grottos that mark the spot believed to be the birthplace of Jesus.

“It’s a miracle being here on Christmas Eve. It’s a lifetime opportunity. I wish everybody could be here,’’ he said.

But the Holy Land’s top Roman Catholic cleric, Latin Fouad Twal, reminded listeners in a holiday address that peace remains out of reach. “The wish that we most want, we most hope for, is not coming. We want peace,’’ Twal said after he passed into Bethlehem in a traditional holiday procession from nearby Jerusalem.

Twal and his convoy of dozens of vehicles entered Palestinian-controlled territory through a massive steel gate in Israel’s heavily guarded West Bank separation barrier, escorted by Israeli soldiers and police in jeeps.

The barrier and the heavy Israeli security presence served as reminders of the friction and hostilities that have thwarted peace efforts.

“We want freedom of movement, we don’t want walls,’’ Twal said after passing through the barrier. “We don’t want separation fences. We hope that things will become more normal for us.’’

Only hours later, an Israeli man was shot and killed in the West Bank in an attack by Palestinian gunmen. Such attacks, once common, have become rare in recent years as the West Bank has regained a semblance of normalcy.

Israeli Radio identified the man as a resident of a nearby settlement, and a little-known Palestinian faction took responsibility for the attack.