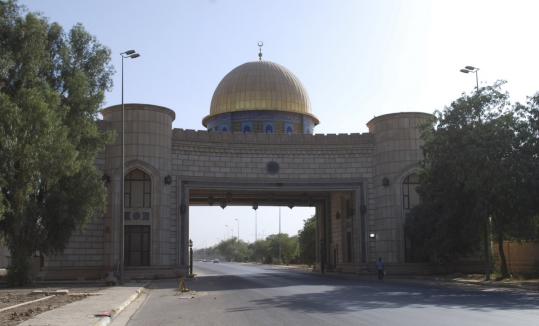 As US military forces and other Westerners have turned over or left compounds and properties, the streets of the Green Zone in Baghdad have become nearly deserted. In two months, the Iraqis will start issuing badges granting varying levels of access. (Ernesto Londono/ Washington Post)
By Ernesto Londono Washington Post / August 16, 2009

BAGHDAD - Baghdad’s storied Green Zone, for six years a bunkered refuge for Westerners in this beleaguered capital, is America’s turf no more.

Iraqi soldiers have set up roving checkpoints inside, and US Embassy and military badges no longer exempt holders from inspection. Iraqi authorities have threatened to seize US vehicles that do not have Iraqi license plates, sending hundreds of American government employees and contractors scrambling to Baghdad’s equivalent of the Department of Motor Vehicles.

In two months, the Iraqis will start issuing badges granting varying levels of access to the Green Zone, a process that until now had been the purview of the US military and for years subjected Iraqis to second-class status in their own capital.

Citing a higher threat of kidnappings and other dangers, the US Embassy, the US military, and private defense contractors have imposed strict rules and, in some cases, curfews to restrict nonessential travel outside the mammoth new embassy compound and other fortified compounds within the Green Zone.

As rules have tightened and the line between the Green Zone and the Red Zone - all the areas outside the fortified refuge - has blurred, diplomats and contractors are mourning the demise of a surreal and often-wild haven that became among the most enduring symbols of this war.

“The Green Zone used to be fun,’’ a veteran US diplomat lamented. “Now we can’t walk across the street.’’

The Iraqi government has long wanted to assert more control over the Green Zone, which until recently was informally governed by a US military task force called the Joint Area Support Group. But the Iraqis assumed complete control over security of the perimeter after the June 30 withdrawal of US troops from Iraqi cities - one of several steps the government took to curb American power and visibility.

“The Americans now stay in their bases,’’ Iraqi soldier Haider Abas said, as he stood guard outside the Green Zone palace that served as the US Embassy until Jan. 1. The departure of American soldiers from the checkpoints in the zone is a welcome development for Iraqis, he added. “When you see someone from your own government, it’s better than being governed by foreign forces.’’

The Green Zone, a 4-square-mile area in Baghdad along the Tigris River, became the hub for the interim government the Americans set up shortly after the March 2003 invasion of Iraq. It got its name from the green, or unloaded, status of weapons inside. Outside, in the Red Zone, weapons were always in red, or loaded, status.

Shortly after the US military bombed Baghdad’s palaces and government buildings during the “shock and awe’’ campaign in 2003, American officials moved into one of the few unscathed ones, Saddam Hussein’s Republican Palace, which became the US Embassy.

American soldiers manned checkpoints and strictly regulated access into an area that would soon become home to thousands of US diplomats, troops, and contractors.

Iraqis who resided inside and those who needed to visit regularly - including top government officials - had to be screened by the US military to obtain badges. They often waited in long lines as Westerners with higher-security badges breezed through checkpoints with nary a pat-down.

As the rest of Baghdad, bedeviled by Shi’ite militias and Sunni insurgents, descended into lawlessness and near-anarchy in the ensuing years, the Green Zone became increasingly impenetrable and divorced from the reality that unfolded outside its cement walls.

It was a freewheeling city within a crippled one, a bubble where the days were long, the parties wild, and the booze plentiful.

The poolside of the Republican Palace became the backdrop for “Baghdad Idol,’’ a spoof of the reality TV show. The pool was used by born-again Christians for baptisms. US diplomats stacked files in Hussein’s sunken tub and set up the political section in his bedroom. A blue US Embassy badge and a low-cut neckline, female diplomats joked, guaranteed unfettered access to the A-list parties.

There were rooftop parties at the Olive House, a compound run by South African security contractors where sweltering summer nights gave way to wet T-shirt contests. There was the Lock and Load bar near the palace, the FBI bar, and the CIA bar, which everyone professed to know about but few could point out on a map.

The who’s who of the Green Zone convened Thursday nights at the venerable Baghdad Country Club, a bar and restaurant that billed itself as an “oasis of calm.’’ With decent steak, fine wine, and occasionally shrimp, it drew crowds of more than 600. The establishment closed in 2007 under pressure from the US military.

Rocket attacks, which became a near-daily occurrence in the springs of 2007 and 2008, put a damper on the nightlife, but the party circuit outlived the spates of violence. The demise of the Green Zone as an American-run haven began Jan. 1, when the Iraqi government assumed control of the area. The Iraqis forced the Americans to depart the old embassy before midnight, and cut off access to a large area in front of it that had included a military store and fast-food restaurants.

As Americans and other Westerners have turned over or left other compounds and properties, the Green Zone’s streets have become dirtier and nearly deserted. For-rent signs have gone up by the dozen.

What was once akin to college life in a war zone has become more like a strict boarding school. Last week, Robert Ford, the deputy chief of mission at the US Embassy in Baghdad, held a town hall meeting to announce more-stringent rules. His message was hard for some embassy veterans to stomach.

Now they are left to reminisce about onetime hot spots, like the Baghdad Country Club, that are only a memory. “It was designed as a place to let off a little bit of steam,’’ said the club’s founder, James Thornett. “It was a period of my life I enjoyed thoroughly.’’