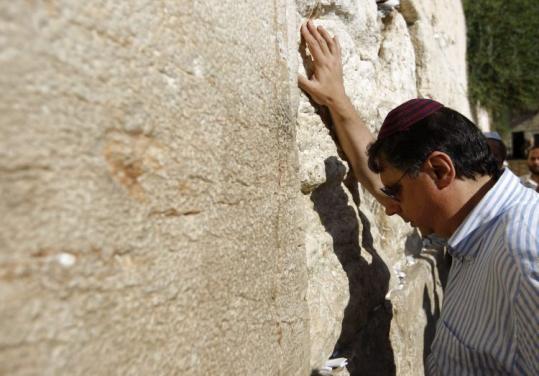 Prime Minister Jan Fischer of the Czech Republic was among those who visited the wall in Jerusalem’s Old City this week. (Ammar Awad/Reuters)
By Steve Weizman Associated Press / July 24, 2009

JERUSALEM - For centuries, people have stuffed prayers written on scraps of paper into the ancient cracks in the Western Wall in the Old City of Jerusalem. In recent years they could fax or e-mail their prayers - and now they can tweet them, too.

The Western Wall now has its own address on Twitter, the social networking service, allowing believers around the globe to have their prayers placed between its 2,000-year-old stones without leaving their armchairs.

The service’s founder, Alon Nil, says petitioners can tweet their prayers, and they will be printed out and taken to the wall, where they will join the thousands of handwritten notes placed by visitors who believe their requests will find a shortcut to God by being deposited there.

The 25-year-old economist started the Twitter page three weeks ago and has already received hundreds of prayers.

“It all started a while after the riots in Iran, and I realized the potential of Twitter,’’ Nil said. “There are an infinite number of uses for Twitter, and I thought ‘What can I do that is new and creative and might benefit the people of Israel?’ ’’

“You name the country, I’ve gotten prayers from them,’’ he said. “I hope in some way that by tweeting their prayers, these people are helping themselves somehow. Once you figure out what you want, in 140 characters or less, you can start to take action.’’

Most of the prayers are sent to Twitter in private messages, but Nil encourages Twitter users to make their prayers public. Only a few, like one identified only as Yonatan, have chosen to do so.

“Praise Hashem for everything he has done for me, may he bless all my endeavors and guide me to wisdom and truth,’’ he tweeted Wednesday, using a Hebrew synonym for God.

The wall, in Jerusalem’s Old City, is all that remains of the compound where the biblical temples stood. King Solomon’s temple was destroyed by invading Babylonians in 586 BC and the second temple, built on the same site, was destroyed by the Romans in 70 AD.

No charge is assessed for placing a prayer at the wall.