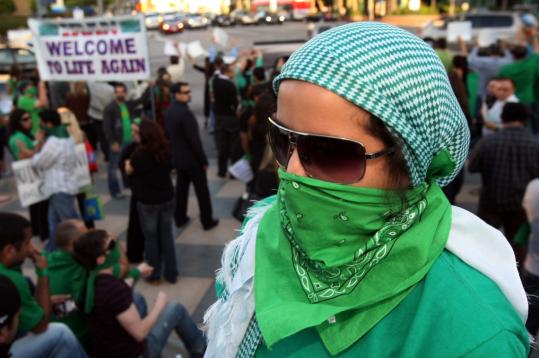 LOS ANGELES - Several months ago, Pouneh, a 24-year-old Iranian-American college student, announced to her father that she was voting for leading opposition candidate Mir Hossein Mousavi in the Iranian presidential election. After Mousavi lost, she joined thousands of demonstrators in Los Angeles calling the results a fraud.

Avesta, her 70-year-old father, shakes his head over what he sees as his daughter’s youthful naivete. The retired medical researcher who left Iran before the 1979 Islamic Revolution believed that any vote was an act of futility that showed support for the current government, which neither he nor his daughter support.

“It’s a general thing for people my age, that they did not and they do not accept the regime of the mullahs,’’ he said. “She thought that there’s no alternative at the moment, and that’s not something that I think is a good judgment.’’

Pouneh countered that her vote made a statement that Mousavi was at least somewhat better than the hard-line incumbent, President Mahmoud Ahmadinejad.

The father-daughter political debates are typical of a generational divide among many Iranian-American families. The 20-somethings want to believe that change is possible in Iran through the ballot box. Their parents, on the other hand, have seen enough elections in Iran to be cynical about the voting process. And they know all too well how the political optimism of their own youth has soured over time.

Avesta mumbled a few words in Persian when the face of an Iranian cleric flashed on CNN.

Later, when another image of clerics sitting around a room appeared, Avesta expressed his displeasure in English: “Look at these fossils.’’

Pouneh rolled her eyes toward her father.

Pouneh and her father asked that their last name not be published because they have relatives in Iran and Pouneh plans to visit Iran.

Pouneh has played a role in organizing a series of demonstrations in Los Angeles over the past three weeks, donning a black face mask to hide her identity in the wake of government crackdowns in Iran.

Her mother worries about her safety. Her father doesn’t mind the concept of protesting against Iran’s government, a system in which clerics, not elected officials, have final authority. But he believes the recent demonstrations are too pro-Mousavi and not antiregime enough.

“They just rally around him and he’s just one of those criminals, he’s no better than the other one,’’ Avesta said.

Masoud Kazemzadeh, a professor of Middle East politics at Sam Houston State University, said Avesta’s views are shared by many expats who left Iran at the time of the Islamic Revolution. Many initially welcomed the ouster of a repressive monarch, but became disillusioned when the new regime arrested opposition leaders, shut down newspapers, forced women to cover up and prevented its critics from running in elections.

They have come to assume that their vote is meaningless, he said.

“The older generation tended to view the whole thing as fake, as pseudo elections,’’ Kazemzadeh said.

The last time Hossein Hedjazi, a well-known Persian radio and TV host in Los Angeles, voted in an Iranian election was in 1979, a few months after the monarchy was toppled in an uprising led by Muslim clerics. Now, he regrets that long-ago decision to fly back to Iran from America to cast his vote. After three decades he is still angry that he believed in the then-supreme leader, Ayatollah Ruhollah Khomeini, who was encouraging people to support the new Islamic Republic.

“He was saying that ‘I’m bringing democracy, I’m bringing freedom, there won’t be any military anymore, we’re going to help the poor people,’ ’’ said Hedjazi.

But the direction the country ultimately took was not the one he expected.

“This younger generation hasn’t been through what they have,’’ said Kazemzadeh, the professor. “Young people . . . [are] much more likely when they hear someone say I’m going to make things better to go out and vote for them.’’