A lifeline for those who aided US 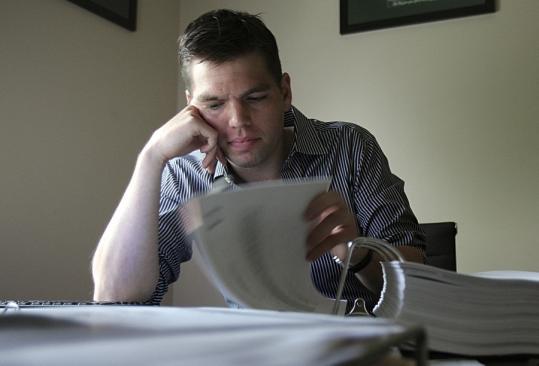 Kirk Johnson collects death threats. Not directed at him, but at the people he is fighting to save.

“To the dirty infiltrator,’’ one of them begins. “To the depraved,’’ starts another.

A former US government official in Iraq, Johnson, 28, has spent the last two years trying to save Iraqis who worked for the United States as interpreters, embassy workers, subcontractors, and in other jobs, and as a result were forced into hiding, tortured, raped, or killed by insurgents and militia. His passion to protect those targeted for death is so fierce he’s been compared to Oskar Schindler, the German businessman who saved Jews from Nazi death camps.

Johnson, who lives in Somerville, is particularly vexed that the same government that helped resettle more than 100,000 refugees here after the Vietnam War seems indifferent toward Iraqis. Only 600 Iraqi allies were admitted last year despite recent legislation making 5,000 special visas available each year. And things may get worse with American combat troops meeting today’s deadline to pull out of Iraqi cities and major towns. “There will be less protection offered to them,’’ Johnson said.

So he’s fighting for them himself, with a story that has caught the attention of Hollywood. George Packer, a staff writer for The New Yorker, has written a play loosely based on his work. Plymouth filmmaker Beth Murphy is doing a documentary. And, he acknowledges, there have been whispers about a possible feature film.

“He is so right, and so selfless,’’ said US District Court Chief Judge Mark L. Wolf, who did legal work in the 1970s for a Vietnamese refugee program, and has been a mentor to Johnson. “He has this moral clarity that is refreshing.’’

Two years ago, Johnson started The List Project to Resettle Iraqi Allies. He has compiled a list of Iraqis in danger and mobilized an army of 200 attorneys to work, pro bono, to cut through the exhausting layers of bureaucracy and protocol. He’s met with the State Department, testified before Congress, talked with senators and members of the National Security Council. So far, he’s helped settle more than 400 Iraqis in the United States.

But there are more than 3,000 names left on the list - the highest number ever - and he suspects there are thousands more eligible Iraqis he hasn’t heard from. “We may think we are done with Iraq,’’ Johnson said. “But Iraq is far from finished.’’

Only four years ago, Johnson was a 24-year-old from West Chicago helping the US government in Iraq rebuild the country and provide humanitarian assistance. His interest in the Middle East goes back to when he was 15 and his grandmother took him to Egypt. At 16 he was studying Arabic; at 17 he attended the American University in Cairo and after that became a Fulbright scholar in Egypt, eventually graduating from University of Chicago with a degree in Middle Eastern history.

After Baghdad fell, he said, he was “strongly opposed to the war,’’ yet he felt an obligation to help the country rebuild Iraq.

Today, Johnson is based, not in Iraq but Porter Square, where he has an apartment. On one wall, there’s a satellite map of Baghdad’s Green Zone; on another a picture of his grandmother.

A scar on one cheek is the only hint of the bizarre accident that ended Johnson’s nation-building in Iraq and nearly ended his life. As he vacationed with his family in the Dominican Republic, his mind kept flashing back to the bombs and rockets he lived through in Fallujah, until one night he snapped. Witnesses saw him fall out of his hotel window. He smashed his jaw, nose and wrists, and cracked his skull. He was diagnosed with post-traumatic stress disorder; a psychiatrist told him the fall was probably caused by a trauma-induced “dissociative fugue state.’’

He needed 10 months to recover back in Illinois, all the while frustrated he wasn’t finishing the job he’d started. “I stressed to [Iraqis] I was there for the long haul. And then just as I was getting revved up, I sleepwalked out a window.’’

Meanwhile, his government contract expired, and Congress started slashing reconstruction funds. Discouraged, he moved in 2006 to Boston, where he had family and friends; his plan was to live off his savings and write about Iraq.

But around this time he got a desperate e-mail from an Iraqi friend who had been spotted by a neighbor leaving the Green Zone and had come home to find the severed head of a dog in his yard. A note threatened his head would be next. He and his family fled the country.

Johnson wrote about his friend in an op-ed piece for the Los Angeles Times, and soon his inbox was deluged with e-mails from other Iraqi refugees telling similar stories and pleading for help. He started a spreadsheet, and in February 2007, when the list got to 40 names, he took it to Washington, where he met with members of the State Department’s Bureau of Population, Refugees and Migration and later, he met with Senator Edward M. Kennedy.

“I had utterly no idea how the resettlement process worked,’’ Johnson acknowledged. “A lot of it was sort of playing air guitar. I had to grope my way through it.’’

But grope he did. His list grew by about 75 names each week, and as word of his project reached Iraq, calls flooding in. “They were people who had fled, who were running out of time in Syria or Jordan; or people who had had their cover blown and were basically in hiding in Baghdad. There was an intense urgency to their calls.’’

But Johnson had his own problems. He was broke. One day, after he’d moved into his aunt’s apartment in Brighton, he saw a lost cat sign offering a $50 reward. “It would have tripled my bank balance,’’ he said.

Fortune intervened when a New York philanthropist sent him $125,000 and offered him a furnished condo on Central Park South. “I went from looking for stray cats to having windows with remote blinds,’’ he said, laughing. “She saved the project.’’

There have been times when Johnson feels optimistic, as he did when President George W. Bush signed a law legislating up to 5,000 special immigrant visas each year for five years for Iraqis who worked with the United States. Yet only about 600 of these Iraqi allies made it into the nation in the last fiscal year, Johnson said, even as more than 11,000 Iraqis who did not work for the United States were admitted.

“It’s the question we pull our hair out about all the time,’’ said Johnson, who moved to Somerville in January.

Every day, he says, he gets calls, text messages, and Facebook e-mails from Iraqis still in Iraq or seeking refuge in Syria and Jordan, wondering why their cases are taking so long.

Still, he’s heartened. Two months ago he met with members of President Obama’s National Security Council, and while he left hopeful, he is tempering his optimism. “The American public is done with this war.’’

But Johnson is not. He hopes to return to Iraq in August, meet with Iraqis on his list, and assess how the US drawdown of forces is affecting them. He has funding to keep the List Project going through next spring. But he’d like to move on, maybe study law. Despite his injuries, his health is good. “I’m walking around. My bones work. My mouth is full of shattered teeth and I have scars on my face but I can live with that,’’ he said.

He’s also started a spinoff called Netroots, with chapters in different cities mobilizing volunteers to help settle Iraqi arrivals. Just last week Johnson visited Ihsan Yaqoob, who worked for the United States as a translator at Abu Ghraib prison and now lives in Chelsea with his family. “If I could,’’ Yaqoob says, “I’d put up a statue to Kirk in Boston.’’