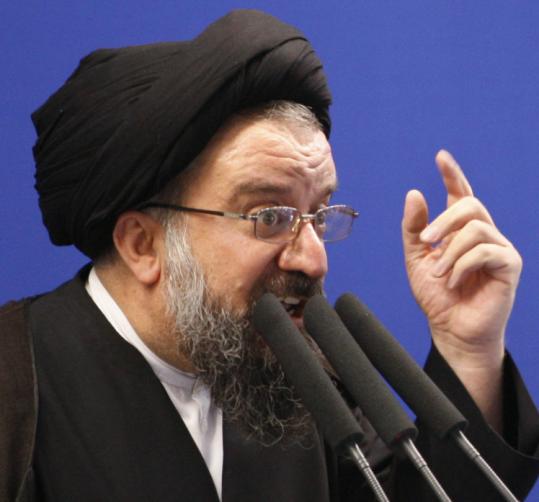 TEHRAN - An influential Iranian cleric told worshipers yesterday that those stirring unrest in connection with the recent election should be punished “ruthlessly and savagely’’ and convicted for waging war against God, a crime that under Shi’ite Islamic law is punishable by death.

In Washington, President Obama condemned recent violence against protesters as “outrageous’’ and dismissed a demand by Iran’s president that he apologize for similar previous comments. Obama suggested that it was President Mahmoud Ahmadinejad who should be apologizing to Iranian victims and their families for the violent actions of security forces.

In a sermon at Tehran University broadcast live to the nation, Ayatollah Ahmad Khatami amplified the ominous tone that the state has adopted this week toward the tens of thousands of demonstrators who have massed in the streets to question the results of the June 12 presidential balloting. The government has deemed the gatherings illegal.

“I want the judiciary to . . . punish leading rioters firmly and without showing any mercy to teach everyone a lesson,’’ said Khatami, an influential cleric close to Iran’s supreme leader, Ayatollah Ali Khamenei. “Based on Islamic law, whoever confronts the Islamic state . . . should be convicted as mohareb. . . . They should be punished ruthlessly and savagely.’’ The word mohareb refers to “who wages war against God.’’

Iran’s judiciary said Tuesday that a special court would be set up to make an example out of “rioters’’ arrested during the demonstrations. According to Iranian state media, more than 450 have been arrested. International human rights groups say the number is higher and includes both demonstrators and well-known dissidents who have called for years for more political freedom in Iran.

A spokesman for the Guardian Council, Iran’s electoral watchdog, reiterated yesterday that the council has found no fraud or significant problems with vote-rigging in the disputed election, in which Ahmadinejad is said to have beaten challenger Mir Hossein Mousavi by nearly 2 to 1.

“After 10 days of examination, we did not see any major irregularities,’’ Abbas Ali Kadkhodai told the official IRNA news agency.

But the council later announced the formation of a “special committee’’ to review the election process and invited Mousavi and another opposition candidate, Mehdi Karroubi, to send representatives to it. The council gave the two candidates 24 hours to name their representatives. It said 10 percent of the ballot boxes would be recounted in the presence of the committee, which would then issue a report about the election.

There was no immediate response from Mousavi or from Karroubi. Mousavi has criticized the Guardian Council as biased toward Ahmadinejad.

On Tuesday, the council announced a five-day extension of an inquiry into the election, which was to have been completed Wednesday. But Kadkhodai said yesterday that even though the formal inquiry will not conclude until early next week, the vote will not be overturned, because no fraud has been found.

The cleric, a member of the Assembly of Experts and a supporter of Ahmadinejad, said that protesters were responsible for the slaying of a young woman, Neda Agha Soltan, who has become an opposition icon since she was shot June 20 on a Tehran street and cellphone cameras captured her dying moments. Khatami asserted that “evidence shows that [protesters] have done it themselves and have raised propaganda against the system.’’ Witnesses said Soltan was shot by a member of the progovernment Basij militia.

Speaking at the White House after a meeting with Chancellor Angela Merkel of Germany, Obama praised the Iranian demonstrators’ “bravery in the face of brutality,’’ adding: “The violence perpetrated against them is outrageous. And despite the government’s efforts to keep the world from bearing witness to that violence, we see it, and we condemn it.’’

He said the Iranian people would be the ultimate judges of their government’s actions. “But if the Iranian government desires the respect of the international community, then it must respect the rights and heed the will of its people,’’ he said.

Later, in response to questions, Obama said that Mousavi appears “to have captured the imagination or the spirit’’ of those in Iran who were “interested in opening up.’’ He indicated that direct US engagement with Iran on the issue of Tehran’s nuclear program would have to wait until the situation in Iran becomes clearer.

On Ahmadinejad’s demand for an apology, Obama said, “I don’t take Mr. Ahmadinejad seriously about apologies, particularly given the fact that the United Stats has gone out of its way not to interfere with the election process in Iran.’’

He said Ahmadinejad should “think carefully’’ about his “obligations to his own people,’’ notably the “families of those who have been beaten, shot, or detained.’’

On Thursday, Ahmadinejad lashed out at Obama, warning him against interfering in Iranian affairs and demanding an apology for criticism of a government crackdown on demonstrators protesting alleged electoral fraud.

Despite an increasingly harsh response to the protests, Mousavi pledged to continue challenging official results. He vowed to resist growing pressure to end his campaign.