Bombings add to toll in Baghdad

Worry rises ahead of US troops’ exit 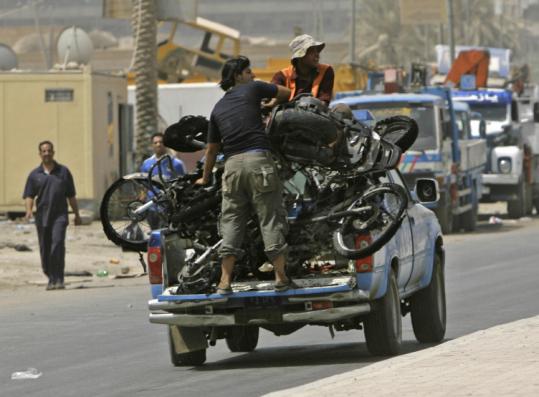 BAGHDAD - A bomb placed in a motorbike exploded at an outdoor market in Baghdad yesterday, killing about a dozen people and wounding scores. It marked the third straight day of violence in the capital before the Tuesday deadline for American combat troops to withdraw from Iraqi cities.

After another similar bombing outside a billiard hall in Baghdad later yesterday that killed two people and wounded seven, the authorities ordered all motorbikes off the streets indefinitely.

Nearly 200 people were killed and hundreds were wounded in attacks over the past week in Baghdad and elsewhere in the country, with the deadliest attacks aimed at Shi’ites. The violence has raised fears of a new bout of sectarian warfare of the sort that ripped Iraq apart in 2005, and that could lead Iraqis once again to seek the protection of militias and armed groups instead of government forces.

The reaction by Shi’ite leaders echoed those concerns.

The bombing yesterday ripped through a market for new and secondhand motorbikes held each week under a bridge in the working-class neighborhood of Nahdha in central Baghdad.

The bomb was placed in a motorbike, Iraqi Army officers at the scene said, killing 10 people and wounding 12. The officers spoke on the condition of anonymity because they were prohibited from speaking to reporters. Later in the day, an official at the Interior Ministry said at least 13 were killed and 45 were wounded. Conflicting reports are common after bombings in Iraq.

“Their bodies were torn up to pieces, even their next of kin could not identify them,’’ an enraged Iraqi soldier said. “It is Iraqi blood, but it is cheap,’’ he added, pointing to a pool of blood nearby.

The wreckage of motorbikes was piled on the back of a police pickup truck.

Many angry onlookers at the scene said that Iraqi forces were to blame because of their lax approach and infiltration in their ranks by insurgents.

The same Iraqi Army unit, the 11th Division, is responsible for Nahdha and the nearby Shi’ite district of Sadr City, where a bombing killed 76 people at a market on Wednesday night.

In Sadr City, hundreds crowded the street outside the local office of Moqtada al-Sadr, the anti-American cleric, to attend Friday Prayer and to listen to a sermon given by one of al-Sadr’s aides.

In a statement read by the preacher Harith Adthari, Sadr blamed the Americans for the explosions, saying they bore “the fingerprints of the occupation,’’ and he urged people to help the loyal Iraqi security forces. He also noted that some infiltrators had penetrated the ranks of the Iraqi forces, and that they must be weeded out.