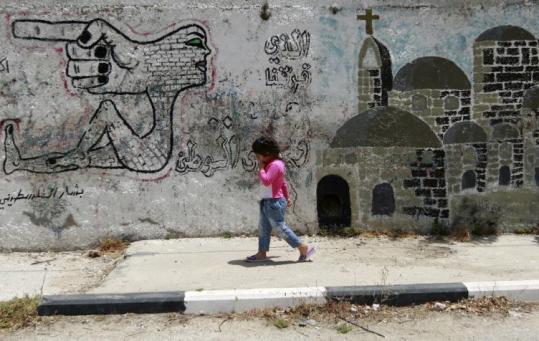 A Palestinian girl walked past graffiti on a wall in Aboud, West Bank. Israel has been heavily criticized over settlements there. (Ammar Awad/Reuters)
By Josef Federman Associated Press / May 20, 2009
Text size – +

Without action to reinforce Obama's words, Saeb Erekat warned, the whole region could deteriorate into extremism and instability. That message was echoed by Netanyahu's political rivals in Israel, who called the meeting a failure and said peace was impossible without establishing a Palestinian state.

Israeli government officials downplayed the differences between Obama and Netanyahu, but the two disagreed publicly about the key issues in Mideast diplomacy - how to deal with Iran, how to solve the Israeli-Palestinian conflict, and the relationship between the two.

Though the two professed friendship, the substance added up to the harshest public confrontation between an Israeli and American leader in nearly a decade, prompting Israeli commentators to warn of storm clouds on the horizon for the important relationship between the two countries.

Despite US pressure, Netanyahu avoided committing to the idea of creating a Palestinian state and instead said the key to solving the Israeli-Palestinian conflict was to halt Iran's nuclear program - a sequencing disputed by Obama.

The US president said progress toward Israeli-Palestinian peace would undercut extremists and help control Iran. He also said Israel must live up to its commitment under the internationally backed "road map" peace plan to freeze West Bank settlement construction.

Erekat, who has been involved in various negotiations with Israel since 1991, welcomed Obama's remarks but said he must force Israel to act to "turn a new page for this region."

Failing to follow through "would mean closing the peace chapter and pushing the region into the hands of extremists," Erekat said.

Underlining the volatility in the region, Palestinian militants in the Gaza Strip fired a rocket at a house in the Israeli town of Sderot yesterday, The attack caused extensive damage but no injuries. Rocket fire has diminished but not ceased since Israel's punishing three-week offensive in Gaza earlier this year.

Several hours later, Israeli warplanes conducted four bombing runs on tunnels, often used to smuggle weapons, along the Gaza-Egypt border, said Palestinian security officials, speaking on condition of anonymity because they were not authorized to talk to the media. The Israeli military had no immediate comment.

Israel's deputy foreign minister, Danny Ayalon, called the disagreements between Obama and Netanyahu "legitimate differences" and said he did not expect a crisis in relations with the United States, Israel's closest ally.

But the confrontation was the worst since 2001, when President George W. Bush faced off with Prime Minister Ariel Sharon over Mideast peacemaking.

"From Israel's point of view, we are ready without any further delay to open up a dialogue - an extensive and serious one with the Palestinians," Ayalon said, adding there should be no preconditions, and that Israel is ready to discuss economic, security, and political issues.

But Palestinian President Mahmoud Abbas has said he won't restart discussions until the Israeli government commits to the creation of a Palestinian state and freezes West Bank settlements. Abbas is due at the White House next week for his first meeting with Obama.

"Anyone who thinks peace can be achieved without a Palestinian state at the end of the road is simply mistaken and misleading the public," Meir Sheetrit, a leader in the Israeli opposition Kadima Party, told Israel Radio.