Pontiff speaks to concerns of Palestinians 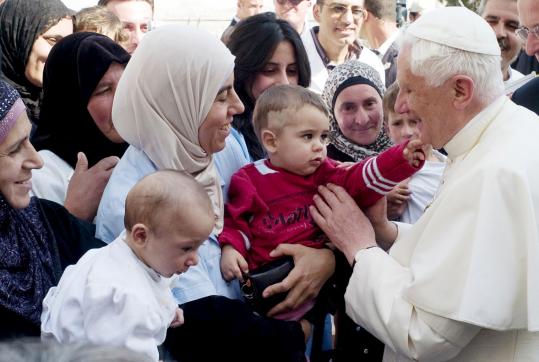 Pope Benedict XVI greeted Palestinians in the West Bank city of Bethlehem yesterday. The pope lamented the ''tragic'' building of walls as he stood in the shadow of Israel's steel and concrete separation barrier in a Bethlehem refugee camp (Peter Dammann/ AFP/ Getty Images)
By Howard Schneider Washington Post / May 14, 2009
Text size – +

BETHLEHEM, West Bank - Pope Benedict XVI criticized Israel's construction of a security barrier through the West Bank and urged a loosening of restrictions on the Gaza Strip yesterday, a day of speeches and symbolic appearances that amounted to a running critique of Israeli policies toward the Palestinians.

From a morning address alongside Palestinian Authority President Mahmoud Abbas to a late-afternoon visit to a refugee camp, the pontiff used a full day in the occupied West Bank to highlight some of the main issues on the Palestinian agenda.

His comments were pointed. And although he referred to Israeli security concerns, the focus was on how Palestinians are affected by Israeli measures such as the tall concrete fence that, Benedict said, "intrudes into your territories, separating neighbors and dividing families."

"In a world where more and more borders are being opened up - to trade, to travel, to movement of peoples, to cultural exchanges - it is tragic to see walls still being erected," Benedict said at Bethlehem's Aida refugee camp, where he spoke in a UN schoolyard with the wall and an Israeli military watchtower in the background.

"It is not something that we wanted to build. It is something that we had to build" to prevent suicide bombings and other attacks, responded Mark Regev, a spokesman for Israeli Prime Minister Benjamin Netanyahu. "We would also hope the reality would be different."

The specificity of Benedict's comments in the West Bank contrasted with what some Israelis regarded as the bland, generic tone he used this week at the Yad Vashem Holocaust memorial in Jerusalem.

The pope delivered his remarks as he went from a red carpet reception at Abbas's Bethlehem compound to a Mass in front of a giant Palestinian flag on the city's Manger Square and a tour of the 5,000-person refugee camp, where children performed a traditional dabke dance.

As he spoke, he delved beyond present-day issues, tracing the roots of the Israeli-Palestinian dispute to Israel's May 1948 declaration of independence and the Arab-Israeli war that followed. Palestinians refer to those events as the naqba, or catastrophe, in which tens of thousands were driven from or left their homes. Many of their descendants live as refugees in such places as Aida, marked at its entrance by a large house key symbolizing an intended return.

The quest for peace "takes on a particular poignancy as you recall the events of May 1948 and the years of conflict, as yet unresolved, that followed from those events," Benedict said at the refugee camp, where he expressed "solidarity with all the homeless Palestinians who long to be able to return to their birthplace."

Whether Palestinian refugees have a right to return to land inside Israel is one of the core issues that separate the two sides. The return of refugees from Gaza, Jordan, Lebanon, Syria and elsewhere would, Israelis contend, overwhelm the Jewish state.

Benedict "did not say 'naqba,' but he mentioned 1948, and this was good enough," Bethlehem Mayor Victor Batarseh said. "These were all really very impressive texts. We were not expecting to hear from him what we heard."

Israeli Foreign Ministry spokesman Yigal Palmor said he did not think the pope's comments were meant to question Israel's founding. But "by going back to 1948 - that is going down a very slippery slope," Palmor said. "That is on the verge of saying something not about Israeli policy, but on the very existence of Israel. I am sure he did not mean it that way. But it might send the wrong message."

Benedict, on his first trip to Israel since becoming pope four years ago, did mention the security needs of both sides, and he urged young Palestinians to reject "violence or terrorism."