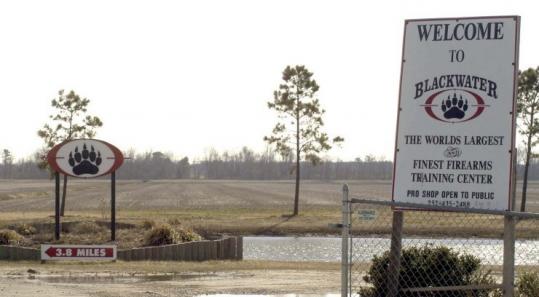 BAGHDAD - The US security firm once known as Blackwater ended its operations in the diplomatic hub of Baghdad yesterday, bringing to a close a bitter chapter in US-Iraqi relations that began with a deadly shooting by its contractors.

Iraqis welcomed the company's departure from the capital. Blackwater, which has changed its name to Xe, had protected American diplomats in Iraq since the start of the war in 2003. Xe will continue to have guards in some southern areas and to run its aviation service through September.

The end of the firm's Baghdad operations came nearly two years after the Iraqi government first demanded it leave, after the September 2007 shooting in a busy square in central Baghdad that left as many as 17 Iraqi civilians dead. The departure yesterday was small consolation for Iraqis.

"As far as I'm concerned this decision should have been taken years ago. Any security firm in Iraq should have used Iraqi personnel so that they could help them know Iraqi culture," Baghdad resident Jabar Farhan said.

US Embassy spokeswoman Susan Ziadeh said Xe's contract for Baghdad ended yesterday and a new security provider, Triple Canopy, based in Herndon, Va., was taking over.

Xe guards will remain protecting American diplomats in the predominantly Shi'ite cities of Hillah, Najaf and Karbala, all south of Baghdad, until Aug. 4, according to the State Department.

And Presidential Airways - which operates some two dozen helicopters - will continue to fly until Sept. 3, it said.

Ziadeh would not comment on the company's other orders, saying only that they "will come to an end once they expire, which will be soon."

Moyock, N.C.-based Xe had continued operations in Iraq despite a decision by the Iraqi government to deny it a license in January, raising questions about the strength of Iraq's sovereignty as it remains heavily dependent on the United States for security.

Iraq's Interior Minister, Jawad al-Bolani, said the government recognized that the US administration needed some transition time in shutting down the company's operations.

"There were certain outstanding technical issues involving the use of Iraqi airspace that required a limited extension," he said.

The Iraqi government also has said it had no objections to the possibility of former Blackwater guards who were not involved in the shootings remaining in Iraq as employees of other companies. "We're dealing with companies, not individuals," Bolani said.

Iraqis have long complained about the heavy-handed behavior of security contractors for Blackwater and other companies. That anger peaked after the 2007 shootings in Nisoor Square.

The shooting strained relations between Baghdad and Washington and became an issue in negotiations over a US-Iraqi security pact that took effect on Jan. 1. The Iraqis demanded the lifting of the blanket immunity that contractors had.

But the American Embassy, which is situated in Baghdad's heavily fortified Green Zone, and US government employees elsewhere in Iraq have relied heavily on Blackwater for protection in extremely dangerous conditions, with threats ranging from suicide attackers to kidnappings.