Call on Turkey to recognize WWI deaths as genocide 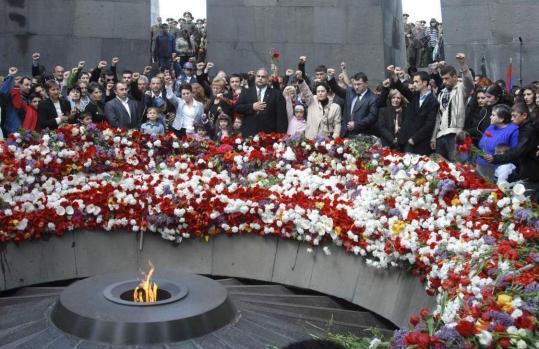 Armenians marked the 94th anniversary of the mass killings, yesterday in Yerevan. Armenians accuse the Turks of genocide in the deaths of up to 1.5 million Armenians during World War I. (Associated Press)
By Avet Demourian Associated Press / April 25, 2009
Text size – +

YEREVAN, Armenia - Tens of thousands of Armenians marched through the capital yesterday to commemorate the 94th anniversary of the start of mass killings by Ottoman Turks, many calling on Turkey to recognize the slayings as genocide.

Armenia and Turkey said Thursday that they are close to restoring full relations and reopening their border after 15 years. But neither side has indicated how they might resolve the dispute over the killings that President Obama yesterday referred to as one of the 20th century's "greatest atrocities."

Throngs marched through the Armenian capital with torches and candles to mark the anniversary of the rounding-up of a few hundred Armenian intellectuals in what was then known as Constantinople - present-day Istanbul - by Ottoman authorities. Their arrest was swiftly followed by the military's forced evacuation of ordinary Armenians from their homes in actions that spiraled into the mass slaughter of the Armenian population.

Armenia says up to 1.5 million Armenians were killed by Turks in what was then the Ottoman Empire, while Turkey says the killings occurred at a time of civil conflict and the casualty figures are inflated. Scholars widely view the event as the first genocide of the 20th century.

Yesterday's procession began with a burning of Turkish flags, and many carried placards blaming Turkey for spilling the "blood of millions" and calling on Ankara to acknowledge the killings as genocide. It ended in central Yerevan at a monument to the victims of the killings, and a liturgy was served at churches throughout the country.

"Crimes against humanity don't expire in the memory of nations," President Serge Sarkisian of Armenia said in a statement. "International recognition and condemnation of the Armenian genocide . . . is a matter of restoring historic justice."

The procession, led by nationalist groups, is an annual event and is not expected to affect the reconciliation process.

The two countries also differ over Azerbaijan's Nagorno-Karabakh region, controlled by Armenia after a six-year war that broke out in the waning days of the Soviet Union. Turkey - which shares close cultural and linguistic relations with Azerbaijan and wants it to absorb the region - insists its talks with Armenia proceed in parallel with Armenian-Azeri discussions. The United States and European Union have urged Turkey and Armenia to resolve their differences.