6 Palestinians hurt in clash with settlers 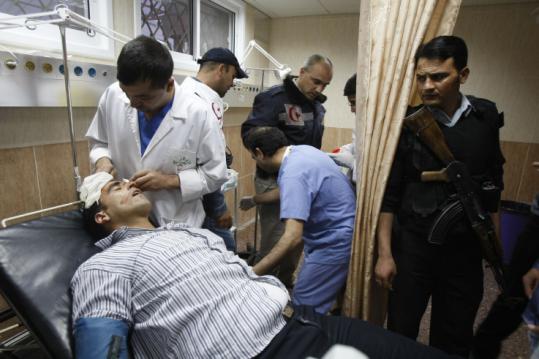 Medics at a hospital in the West Bank city of Nablus treated one of the Palestinians injured in the shooting yesterday. (Jaafar Ashtiyeh/Afp/Getty Images)
Reuters / April 25, 2009
Text size – +

They said 20 Israelis from the settlement of Yitzhar opened fire at a group of Palestinian youths on the outskirts of Arif. Palestinian medics in the city of Nablus said six Palestinians suffered serious and moderate gunshot wounds.

An Israeli army spokeswoman said Palestinians had tried to enter Yitzhar, known for its militant settlers, prompting clashes with residents who tried to stop them.

She did not say whether the clashes involved any shooting but confirmed reports by Wajeeh Safadi, head of Arif's council, that Israeli soldiers had intervened to stop the violence.

Israeli settlers and Palestinians frequently clash in the West Bank.