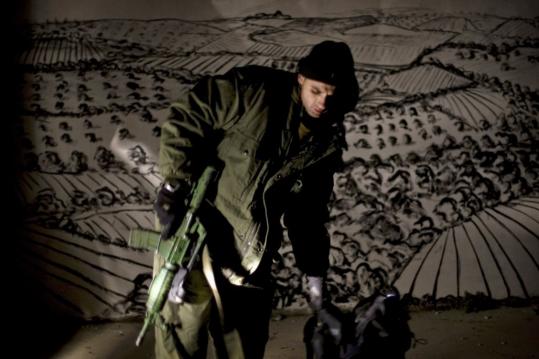 ALONG ISRAEL-LEBANON BORDER, Israel - Filmed with a night-vision camera just before Israeli narcotics officers pounced from nearby bushes, the video shows a Lebanese courier lobbing half-kilo packages of heroin over the border fence into Israel and an Israeli courier throwing back packages of $100 bills.

Israeli soldiers and Hezbollah guerrillas have been battling for years along this frontier. But a quieter war goes on here every night, one between Inspector Gal Ben Ish's narcotics teams and the smugglers who have turned this jumpy border into the main conduit for heroin bound for Israeli drug markets.

Police here believe the trade, worth hundreds of millions of dollars a year, is controlled in large part by Hezbollah, and call it "narco-terrorism."

In the nighttime bust caught on camera last September, Ben Ish's men netted 55 kilograms of heroin, 10 of hashish, $650,000 in cash, and both drug mules. Hopes of repeating that success, and a sense that the smuggling here is more than just crime, have brought them back to this wooded hill in the middle of a biting Galilee night.

"We know that it's not just criminal activity - here there's always the aspect of national defense. We're helping the country's security," said Ben Ish, whose black knitted cap hid a shaved head. He spoke as his men slipped batteries into night-vision goggles at headquarters ahead of the night's ambush, their four green-painted M-16s resting on a beat-up sofa.

Israeli police say Hezbollah, the dominant power in the towns and villages of south Lebanon, takes a cut of the trade and uses the money to fund operations and recruit agents inside Israel, one of them an Israeli army colonel now in jail for trading secrets for drugs and cash.

Information freely changes hands between guerrillas and smugglers, police say. The hard-to-see spots along the fence where Hezbollah ambushed and captured Israeli soldiers twice in the past decade were previously used as drop points for drugs.

To drive home the point that Israeli addicts and dealers are helping Hezbollah's war against their own country, a government anti-drug ad last year portrayed the group's leader, the bearded cleric Hassan Nasrallah, emerging grinning from a bong like a genie from a bottle.

The security forces of the Lebanese government, in which Hezbollah wields veto power, say they are trying to combat the smuggling. A Hezbollah spokesman in Beirut refused to comment on the allegations that the group is involved in the drug trade.

At the night's ambush site, two policemen sat amid bushes near the border fence, covering themselves with camouflage nets and pulling masks over their faces. Two other cops with rifles and motorcycle helmets waited nearby with an all-terrain vehicle while Eli Makias, a 20-year police veteran, manned a lookout point on a hill to the south.

Every month the policemen average hundreds of hours of boredom and one significant bust.

"You develop senses like an animal," said Amir, a 10-year-veteran. "You're coiled like a spring, and then when it actually happens, the catch, the adrenaline starts."

Like most of the unit's officers, he declined to give his family name because of concerns he could be located by smugglers.

Between four and five tons of heroin entered Israel in 2008, nearly all of it through Lebanon, according to an estimate from the government's Anti-Drug Authority. Most originates in Afghanistan, with a small portion produced in Turkey, Iraq and in the opium fields of Lebanon's Bekaa Valley, which have recently seen a resurgence after several years of decreased production.

In that same period of time, Ben Ish's men caught a total of 155 kilograms, along with smaller amounts of other drugs and nearly $1 million in cash - a record year for the unit but a fraction of the drugs and money changing hands.

On the Israeli side, the trade is controlled by Israeli Arab crime families with close ties to their counterparts in Lebanon. The couriers are Israeli Arabs.