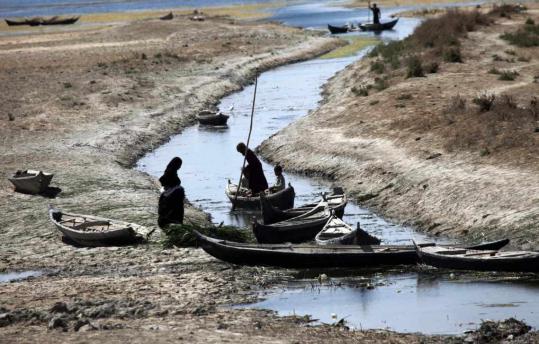 HOR AL-HAMMAR, Iraq - A severe drought is threatening Iraq's southern marshes - the traditional site of the biblical Garden of Eden - just as the region was recovering from Saddam Hussein's draining of its lakes and swamps to punish a political rebellion.

Marshes that were coming back to life a few years ago with UN help are again little more than vast expanses of cracked earth. The area's thousands of inhabitants, known as Marsh Arabs, are victims of the debilitating drought that has ravaged much of Iraq and neighboring countries the last two years.

"I have no work. Our livestock have died. Our children have left school because we don't have money to buy them clothes," said fisherman Yasir Razaq. He spoke in front of his wooden boat, which sat on a dried-up lake bed in the Hor al-Hammar marsh near Nasiriyah, 200 miles south of Baghdad.

The Marsh Arab culture existed for more than 5,000 years in the 8,000 square miles of wetlands fed by the Tigris and Euphrates rivers. The marshes boasted hundreds of species of birds and fish, and periodic flooding created fertile farm lands.

The flooded, flat plain is said to have played an important role in the development of an agriculture-based culture that helped raise civilization to new heights. Some biblical scholars identified the vast marshes - the most extensive wetlands in the Middle East - as the site of the fabled Garden of Eden.

But after the 1991 Gulf War, the marshes became a casualty of Iraq's religiously based politics.

Hussein, a Sunni Muslim, considered the thousands of mostly Shi'ite Marsh Arabs to be disloyal - first in the Iran-Iraq war of the 1980s and more seriously when Shi'ites in southern Iraq rose up against his regime after a US-led coalition forced the Iraqi Army out of Kuwait.

Many Shi'ite rebels hid among the Marsh Arabs in the forests of reeds and myriad of lakes. To punish them, Hussein built a massive network of dams and earthen walls to divert water and dry the marshes.

The effect was devastating.

By the time Hussein was overthrown in 2003, the marshes had shrunk by 90 percent from their size in the 1970s, when they had covered nearly 3,500 square miles - larger than Delaware.

Many experts direly predicted that the marshes might disappear entirely by 2008.

The United Nations launched an $11 million project to restore the marshes, including removing some of the barriers that were keeping water from flowing.

And by 2006, more than half the original marshlands had successfully flooded.

"Our ministry right from beginning . . . started considering the restoration of the marshes area to be our priority," said Iraq's water resources minister, Abdul-Latif Jamal Rasheed, adding that the effort had achieved some success.

The marsh restoration programs depend on adequate water flow in the Tigris and the Euphrates, the two rivers that gave Iraq its ancient name of Mesopotamia - Greek for "land between the rivers."

But the recent drought has caused the levels of those two rivers to fall.

Iraq's winter ended without adequate rain for a second year in a row. Overall, the rainfall for the past two years has been only about 30 percent to 40 percent of normal levels - not only in Iraq but in Syria and southeastern Turkey to the north, where the great rivers begin.

By the time the rivers meander through Iraq down to its southern marshes, much of the water has already been diverted into canals to irrigate farms.

Last month, the UN's Food and Agriculture Organization and the Iraqi government announced a new $47 million program to restore the marshes, focusing on the southern provinces of Maysan, Dhi Qar, and Basra.

But the program's Iraq director, Dr. Fadel el-Zubi, expressed doubt that the marshes can be fully restored without a break in the drought. Also needed are new water-sharing agreements among countries in the region, he said.

Much of the program is aimed at improving the lives of Marsh Arabs, who pursue a life of fishing and foraging that has not changed substantially for thousands of years.

Among other things, the program will include restocking the marshes with fish capable of surviving in areas where low water levels have raised the salt content, Zubi said.

Even with the drought, the outlook for the marshes is better than a decade ago.

But that means little to many of the Marsh Arabs.

"We hoped the new government might do something," said a fisherman who gave his name only as Mohammed because he feared criticizing the government publicly. "But it's still the same. This is the second time that the water has been drained away."