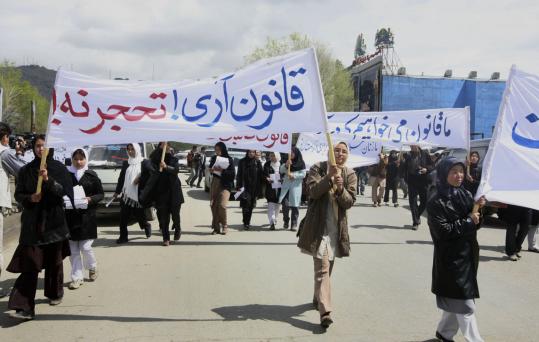 KABUL, Afghanistan - The young women stepped off the bus and moved toward the protest march just beginning on the other side of the street when they were spotted by a mob of men.

The women scattered as the men moved in.

"We want our rights!" one of the women shouted, turning to face them. "We want equality!"

The women ran to the bus and dove inside as it rumbled away, with the men smashing the taillights and banging on the sides.

But the march carried on anyway. About 300 Afghan women, facing an angry throng three times larger than their own, walked the streets of the capital yesterday to demand that Parliament repeal a new law that introduces a range of Taliban-like restrictions on women, and permits, among other things, marital rape.

It was an extraordinary scene. Women are mostly illiterate in this impoverished country, and they do not, generally speaking, enjoy anything near the freedom accorded to men. But there they were, most of them young, many in jeans, defying a threatening crowd and calling out slogans heavy with meaning.

With the Afghan police keeping the mob at bay, the women walked 2 miles to Parliament, where they delivered a petition calling for the law's repeal.

"Whenever a man wants sex, we cannot refuse," said Fatima Husseini, 26, one of the marchers. "It means a woman is a kind of property, to be used by the man in any way that he wants."

The law, approved by both houses of Parliament and signed by President Hamid Karzai, applies to the Shi'ite minority only, essentially giving clerics authority over intimate matters between women and men. Women here and governments and rights groups abroad have protested three parts of the law especially.

The passage of the law has amounted to something of a historical irony. Afghan Shi'ites, who make up about 10 percent of the population, suffered horrendously under the Taliban, who regarded them as apostates. Since 2001, the Shi'ites, particularly the Hazara minority, have been enjoying a renaissance.

Karzai, who relies on vast support from the United States and other Western governments to stay in power, has come under intense international criticism for signing the bill into law. Many people here suspect that he did so to gain the favor of the Shi'ite clergy; Karzai is up for reelection this year.

Responding to the outcry, Karzai has begun looking for a way to remove the most controversial parts of the law.

In an interview yesterday, his spokesman, Homayun Hamidzada, said that the legislation was not yet law because it had not been published in the government's official register. That, Hamidzada said, meant that it could still be changed. Karzai has asked his justice minister to look it over.

"We have no doubt that whatever comes out of this process will be consistent with the rights provided for in the constitution - equality and the protection of women," Hamidzada said.

The women who protested yesterday began their demonstration with what appeared to be a deliberately provocative act. They gathered in front of the School of the Last Prophet, a madrassa run by Ayatollah Asif Mohsini, the country's most powerful Shi'ite cleric. He and the scholars around him played an important role in the drafting of the new law.

"We are here to campaign for our rights," one woman said into a loudspeaker. Then the women held their banners aloft and began to chant.

The reaction was immediate. Hundreds of students from the madrassa, most but not all of them men, poured into the streets to confront the demonstrators.

"Death to the enemies of Islam!" the counterdemonstrators cried, encircling the women. "We want Islamic law!"

The women stared ahead and kept walking.

A phalanx of police, some of them women, held the crowds apart.

Afterward, when the demonstrators had left, one of the madrassa's senior clerics walked outside.

Asked about the dispute, he said it was between professionals and nonprofessionals; that is, between the clerics, who understood the Koran and Islamic law, and the women calling for the law's repeal who did not.