Youth orchestra shut down amid outcry of politics 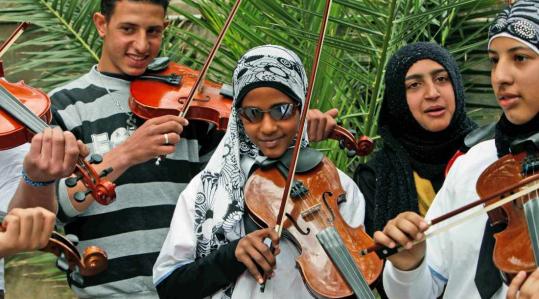 JENIN, West Bank - Authorities in an impoverished Palestinian refugee camp have shut down a youth orchestra, boarded up its rehearsal studio, and banned its conductor from the camp after she took 13 young musicians to perform for Holocaust survivors in Israel, an official said yesterday.

Conductor Wafa Younes took the children from her Strings of Freedom orchestra to sing songs of peace last week as part of an annual Good Deeds Day organized by Israel's richest woman. But once parents and leaders back in West Bank's Jenin refugee camp realized where the group had been, they shut down the program, saying Younes had dragged the children into a political issue.

The discord highlights both the distrust many Palestinians have of any engagement with Israel, as well as their reluctance to acknowledge Jewish historical suffering because of concerns that it weakens their own claim to this disputed land.

Some 6 million Jews were killed in the Nazi campaign to wipe out European Jewry, and the urgent need to find a sanctuary for hundreds of thousands of survivors catalyzed the creation of Israel after World War II.

A community leader in the Jenin camp, Adnan Hindi, said the musicians' parents had not known where Younes was taking their children and were angry when they learned of the performance from media reports.

"She exploited the children for a big political issue," said Hindi, head of a camp committee responsible for municipal duties.

Hindi did not deny there was a Holocaust, but said Palestinians had suffered at the hands of Israel.

"The Holocaust happened, but we are facing a similar massacre by the Jews themselves," he said. "We lost our land, and we were forced to flee and we've lived in refugee camps for the past 50 years."

More than 700,000 Palestinians either fled or were expelled from their homes in the war that followed Israel's creation, an event Arabs call the Naqba, or catastrophe. Many people still live in refugee camps like Jenin.

"If I had known this was a political excursion, I would not have let my son go," said Ibrahim Samour, father of 18-year-old Qusay, who plays the kamanja, a traditional Arab stringed instrument similar to a violin.

When asked why he objected to his son performing for the group of about 30 elderly Holocaust survivors near Tel Aviv, Samour, 61, said his family fled to Jenin in 1948 from land that is now part of Israel.

"I'm not denying bad things happened to them, but there has to be mutual recognition," he said.

Ignorance of the Holocaust, and even denial that it took place, are widespread in Palestinian society.

Younes, an Arab from the northern Israeli village of Ara, had been training the modest orchestra of 11- to 13-year-olds for about three years and had taken them on previous trips, camp residents said.

Younes said camp officials closed the ensemble so they could take over its funds.

The project was bankrolled by billionaire businesswoman Shari Arison.

At Wednesday's concert in Holon, neither the orchestra nor the audience initially knew where the other was from. Audience members gasped when the performers were introduced as West Bank Palestinians, a rare sight in Israel.

"You can't understand Israel unless you understand the role of the Holocaust in Israeli identity," he said. "And if you don't understand your enemy, you can't make peace."