In Turkey, Clinton says Obama to visit, shore up alliance

Ties viewed as key to regional interests of US 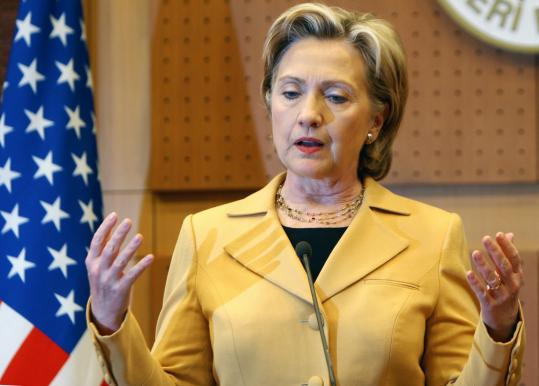 Secretary of State Hillary Rodham Clinton said yesterday in Ankara that her visit to Turkey was ''a reflection of the value we place on our friendship.'' The invasion of Iraq has strained ties. (Burhan Ozbilici/ Associated Press)
By Scott Wilson Washington Post / March 8, 2009
Text size – +

The trip will partly fulfill Obama's pledge to engage Islamic countries in a substantive way within his first 100 days in office. But the president is not expected to use the Turkey visit to deliver an address on Islam that he has promised to give in a Muslim capital.

Turkey's place on his itinerary gives the administration more time to prepare the Muslim speech as Obama begins new diplomatic efforts with Syria and Iran.

Clinton announced Obama's travel plans after meeting with Turkish leaders in Ankara, the capital, on the last stop of her weeklong trip to five countries.

"We share a commitment to democracy, a secular constitution, respect for religious freedom, and belief and in free market and a sense of global responsibility," she said of the two nations.

Clinton also encouraged peace contacts between Israel and Syria, as two senior US officials made a rare visit to Syria in a sign of warming ties between Washington and Damascus.

A NATO ally, Turkey is viewed as crucial to aiding the US pullout from Iraq, turning around the Afghanistan war, and blocking Iran's nuclear ambitions.

The Turkish government had advised against the US-led invasion of Iraq in 2003 and refused to permit US ground forces to launch elements of the attack from Turkish soil.

But Washington and Ankara are now consulting on ways Turkey can help facilitate the withdrawal of US troops from Iraq. Turkey has said it is ready to serve as an exit route for the Americans. The US air base at Incirlik, Turkey, has been used for the transfer of US troops and equipment to Iraq and Afghanistan.

Obama's visit would extend the administration's outreach toward Islamic nations that began when Obama gave his first television interview as president to an Arabic satellite channel. Administration officials said the interview signaled a new approach toward a population dismayed by US policy in Iraq, Afghanistan, and the Palestinian territories.

As a non-Arab Muslim nation, Turkey is well placed to serve as a key administration ally on those issues. Governed by a moderate Islamist party, Turkey accommodates religious and secular values in its democratic system, something other governments in the Arab Middle East have been unable to achieve with the same success.

"Turkey is one of those countries that shows that there doesn't have to be a clash of civilizations," said Marc Grossman, a former US ambassador to Turkey.

Obama's visit to Turkey is likely to conclude a European tour scheduled to begin early next month. On his second trip abroad since taking office, Obama's agenda will focus on the worsening global financial crisis and security, particularly the war effort in Afghanistan.

The president will first visit London for the Group of 20 summit on the global economic downturn. He then travels to Strasbourg, France, for a NATO summit expected to include a forceful US appeal for more European troops in Afghanistan.

Then Obama will travel to Prague for a meeting of European Union leaders.

By concluding with a stop in Turkey, Obama is seeking to highlight its importance as a growing market, military ally, and key player in securing oil and future natural gas from the Caspian region, administration officials and outside analysts said.