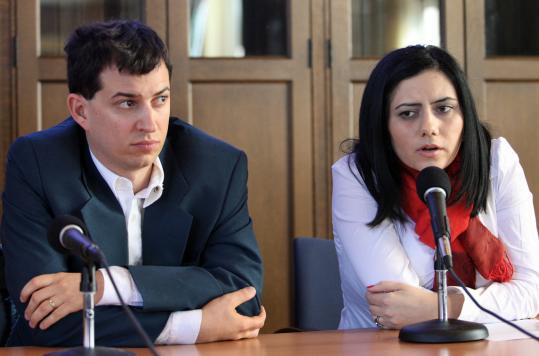 There could hardly be a less hopeful moment for peace between Israelis and Palestinians: Israeli forces invaded the Gaza Strip last month, and then Israeli voters marched firmly to the right in elections. Palestinians are more divided than ever, with the hard-line Hamas movement still firing rockets from Gaza at Israeli towns, while the moderate Fatah faction has been sidelined.

Yet Nisreen Abdallah, a Palestinian, joined Roi Assaf, an Israeli, in a conference room at the Harvard Divinity School this week to make the case that this is precisely the moment for compromises that will let Palestinians and Israelis live side by side in two secure states.

It was the first stop on a weeklong tour of a dozen schools and colleges in New England for leaders of OneVoice Israel and OneVoice Palestine, parallel organizations that are pushing for a two-state solution. Their goal: build a critical mass of moderates in each of their communities able to challenge the extremists and move toward peace.

Muslim and Jewish student organizations are cosponsoring the OneVoice meetings around Boston campuses - where Abdallah and Assaf offer firmly nationalistic arguments that reflect the strong emotions flowing from years of grievances and slights in both camps.

At Harvard, Abdallah told of the humiliation she has endured at Israeli checkpoints in the Palestinian West Bank, and her hatred of the Israeli soldiers who run them. Assaf told of serving as an Army sergeant in charge of one of those tense checkpoints, at a time of suicide bombings by Palestinians in Israel.

Nevertheless, Abdallah and Assaf both conclude that the only way to protect their own community's future well-being is to create a viable Palestinian state that recognizes a secure Israel. The OneVoice case is that this is not a naive dream but hardheaded self-interest; the alternative is more years of worsening bloodshed.

They both acknowledged the particularly pessimistic context for their work.

"The option is still there for a two-state solution, but on both sides the window is narrowing down," Assaf said. Moderates have been undermined by the Gaza fighting, he said, because the conflict "pushes people on both sides toward the extremes."

For her part, Abdallah said Palestinians in the West Bank watched with a mixture of anguish and anger as the Israelis have focused recently on Hamas and Gaza while all but ignoring Palestinian President Mahmoud Abbas, the leader of the moderate Fatah faction that controls the West Bank.

"The danger is that people start to think that violence can achieve something," she said. "We have a lot of people becoming pro-Hamas because they see that Hamas is getting more attention from the Israelis."

The OneVoice branches operate separately in Palestinian areas and Israel. Unlike some peace groups, the goal is not to get dialogue going with the other side, but rather to energize the moderate center within each community to make its voice heard in favor of a two-state deal.

OneVoice also is premised on moving beyond the vexing historical disputes that underlie issues such as the status of Jerusalem and the rights of Palestinian refugees, knowing that Palestinians and Israelis will never persuade each other to concede past wrongs.

"I am not here to discuss every argument," Assaf said. "If you go down the path of arguing each narrative, I will tell you that I am 100 percent right on these issues, and the other side will tell us they are 100 percent right. We are trying to build something to reach a future. If you don't see a future, you fail."

OneVoice was founded in 2002 by Daniel Lubetsky, a Mexican-born entrepreneur and social activist who lives in New York and Israel. The organization's Israeli and Palestinian branches boast of signing up nearly 650,000 people, roughly equally divided between the two communities, in favor of sustained negotiations for a two-state solution.

Assaf and Abdallah are the full-time coordinators for the 1,800 volunteer youth leaders in the two movements, who organize local projects in schools and neighborhoods. Their recent programs include the "Imagine 2018" project last year, in which Israeli and Palestinian students wrote essays on what their societies would look like in a decade if the conflict ended.

She said the OneVoice campus tours seek to engage moderates in the United States who will speak out for mutual engagement, rather than remain mired in the old divisions.