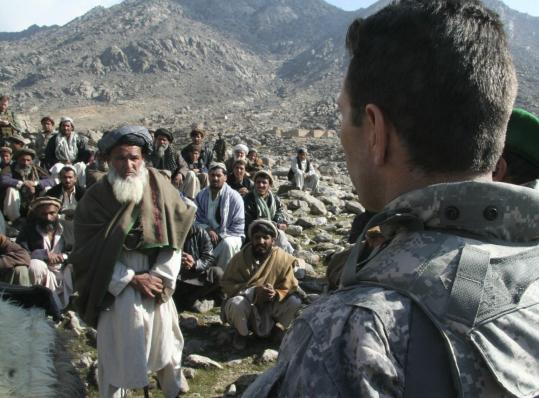 WASHINGTON - Defense Secretary Robert Gates said yesterday the United States is "lost" unless it can find a way to not kill so many civilians in the pursuit of militants in Afghanistan, and that flooding the chaotic country with US troops would be a disaster.

Gates, the only Bush Cabinet member President Barack Obama asked to stay on, told a Senate panel that the Pentagon could send two more brigades to Afghanistan by late spring, and a third by late summer, to try to salvage a war that has ground to a grim standoff with entrenched and resourceful militants.

But Gates said he is deeply skeptical about adding any more US forces after that, in part because military dominion in Afghanistan has failed for every great power that tried it.

"The civilian casualties are doing us an enormous harm in Afghanistan, and we have got to do better" to avoid innocent deaths, even though the Taliban militants use civilians as cover, Gates told the Senate Armed Services Committee. "My worry is that the Afghans come to see us as part of the problem, rather than as part of their solution. And then we are lost."

Bracing and blunt, Gates outlined an agenda for Afghanistan that is closely focused on US strategic needs in a battle against terrorism and extremism, and that trims the democratic ambitions of the Bush administration.

"We need to be very careful about the nature of the goals we set for ourselves in Afghanistan," Gates said.

The United States should keep its sights on one thing: preventing Afghanistan from being used as a base for terrorists and extremists who would harm the United States or its allies, Gates said.

"Afghanistan is the fourth or fifth poorest country in the world, and if we set ourselves the objective of creating some sort of Central Asian Valhalla over there, we will lose," Gates said, referring to a haven of purity in Norse mythology. "Nobody in the world has that kind of time, patience or money, to be honest."

Gates joined US fortunes in Afghanistan to the related struggle against extremism in Pakistan, but signaled no reduction in US missile strikes or other raids that infuriate both populations and besmirch the US-backed governments in Kabul and Islamabad.

"Both President Bush and President Obama have made clear that we will go after Al Qaeda wherever Al Qaeda is and we will continue to pursue them," Gates said.

Admiral Mike Mullen, chairman of the Joint Chiefs of Staff, also indicated that missile strikes will continue. He said rules for using missiles in Afghanistan were carefully set, and while the Pentagon has studied possible changes to the rules, the US commander there has not asked for one.

"I don't think we can succeed in Afghanistan if civilians keep dying there," Mullen said. "And we've got to figure out a way to absolutely minimize that, the goal being zero."

Afghanistan and Pakistan are the nation's top military priority, Mullen said, and he echoed Gates's sober assessment of Afghanistan.

"The risk of where we are in Afghanistan right now in terms of outcomes, I think . . . is pretty high right now because it's not going well and it hasn't been going well for a significant period of time," Mullen told reporters at the Foreign Press Center.

To the constellation of problems in Afghanistan - corruption, the flourishing drug trade and the limited competence of the central government - Mullen added that the United States couldn't do as much as it might have liked to counter the resurgence of the Taliban because its troops were tied up in Iraq.