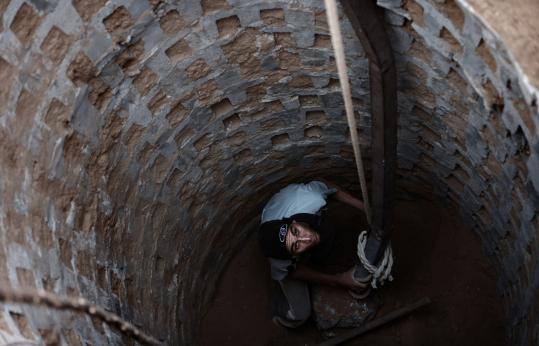 JERUSALEM - Israeli leaders worked yesterday to reinforce a fragile cease-fire in the Gaza Strip and to respond to international criticism of civilian casualties inflicted by Israel's 22-day offensive against Hamas militants who control the Palestinian enclave.

Israel's foreign minister, Tzipi Livni, met in Brussels with European leaders about preventing arms smuggling into Gaza, and in Tel Aviv, military officials said they were investigating complaints that Israeli forces ignored international restrictions on the use of phosphorous weapons during their attacks in Gaza.

As Israel completed a rapid troop pullout yesterday morning, the World Health Organization released a report estimating that 1,300 Palestinians were killed during the fighting, including 410 children and 104 women. About 5,300 Palestinians were injured, half of them women and children, the report said.

At least 13 Israelis died, three of them civilians and four of them military personnel accidentally killed by Israeli fire.

In addition to allegations of indiscriminate violence, critics accuse Israel of violating international law restricting the use of phosphorus weapons, which can inflict horrific burns. Phosphorus artillery shells and similar weapons are not illegal, but the law bars their use in densely populated areas such as Gaza City, one of the most crowded urban areas in the world.

An Israeli committee led by a colonel will investigate the allegations by human rights groups and the foreign press, officials said. The Israeli Defense Force established the committee Jan. 16, according to the statement.

"In response to the claims . . . relating to the use of phosphorus weapons, and in order to remove any ambiguity, an investigative team has been established in the Southern Command to look into the issue," the statement said. "It must be noted that international law does not prohibit the use of weaponry containing phosphorus to create smoke screens and for marking purposes. The IDF only uses weapons permitted by law."

In another repercussion of foreign condemnation of Israeli tactics, the military made an unprecedented decision yesterday to conceal the identities of commanders who had been interviewed by the Israeli media. Military censors decided shortly before the airing and publication of the interviews that names would be withheld and faces would be blurred in television reports, according to the Israeli media.

The decision results from concerns about attempts to pursue war-crimes prosecutions against Israeli officials in foreign courts. Military brass also warned officers that they might be in danger of arrest or violent reprisals if they travel abroad, according to news reports. During a visit to the Southern Command, Prime Minister Ehud Olmert told soldiers that the government would protect them "like a fortified wall" against potential prosecutions, according to news reports.

Chanting "war criminal," hundreds of pro-Palestinian protesters demonstrated against Livni's visit in Brussels. Livni and 27 European counterparts discussed ways in which the European Union can contribute military forces, ships and technology to stop arms smuggling into Gaza by Hamas and other Palestinian militant groups. In a plan outlined last week, the United States agreed to provide detection and surveillance equipment, logistical help and training to Israel, Egypt and others to monitor Gaza's land and sea borders.

Israel said it launched the Gaza offensive to stop Hamas's military buildup and eight years of rocket attacks on communities in southern Israel. The Hamas rocket arsenal has been either smuggled to Gaza from Iran or assembled by Hamas specialists with Iranian training, according to Israeli officials.

Pledging to support the anti-smuggling accord as part of a larger peace effort, on his first day in the White House, President Obama telephoned Olmert, Palestinian Authority President Mahmoud Abbas and the leaders of Egypt and Jordan. Saeb Erekat, a senior Palestinian negotiator in the West Bank, said Abbas, who heads the Fatah faction that was ousted from Gaza by Hamas in mid-2007, was reassured by the call.

A Hamas spokesman was less enthusiastic, demanding that Obama review the US position.