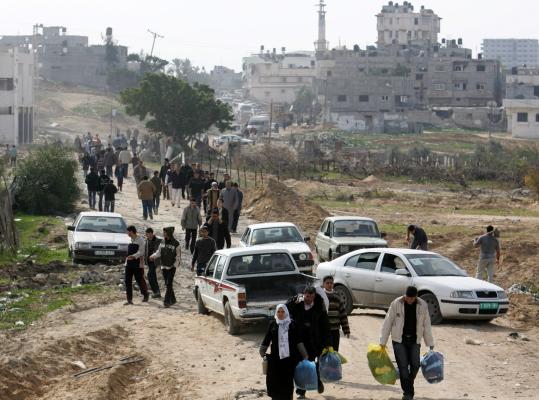 "Hamas emerged from this battle with its head held high," said Hamad al-Ruqb, a Hamas official in the southern city of Khan Yunis. "Every Israeli attack only increases our support."

As the cease-fire held, Israeli tanks and soldiers continued their withdrawal from the coastal enclave yesterday.

Israeli officials said they hoped to pull all troops out of the Gaza Strip by the time Barack Obama was inaugurated as president today, the Associated Press reported. That would avoid subjecting Obama to a Mideast problem on his first day in office.

But Israeli government officials stressed that today's deadline would not be met if militants resumed rocket attacks.

Gaza residents emerged from weeks of hiding to assess the damage. In addition to a death toll estimated at more than 1,300, the Palestinian Central Bureau of Statistics estimated infrastructure and economic losses at almost $2 billion.

The agency's director said 21,000 buildings were either damaged or destroyed, including 4,100 homes, about 1,500 factories and workshops, 20 mosques, and 10 water or sewage lines.

Much of the reconstruction costs will be covered by donations from Arab countries. At an Arab League summit in Kuwait yesterday, King Abdullah bin Abdul-Aziz of Saudi Arabia pledged $1 billion toward Gaza's reconstruction.

As the tanks continued to withdraw, the full scope of the destruction came into focus.

In the village of Al Fukhari, outside Khan Yunis, it looked like a magnitude-7 earthquake had struck, leaving a collection of 15 homes belonging to a single extended family a swath of churned destruction the size of a city block. Israeli tanks and bulldozers rolled through this agricultural patch last week, destroying every building in sight.

Residents picked through the wreckage among muddy, thigh-high tread marks, salvaging clothing, blankets, and undamaged cinder blocks, hauling anything usable away on tractors and donkey carts.

"They even killed the chickens and the turkeys," shouted Faour Atteya, 50, a high school teacher. "They killed the cats!"

At Atteya's feet, his son, Yasser, 2, sat wailing atop a small pile of muddied clothes. Colorful bits of debris jutted out of a nearby pile of rubble: a small plastic chair, bits of construction paper, and an Arabic coloring book.

"This was the neighborhood nursery school run by a charitable organization," Atteya said.

A short drive away in the village of Al Khozaa, residents pointed cautiously at the lone Israeli tank still visible in the distance. A fierce tank thrust destroyed some dozen homes here, killing at least 13 people.

Despite the devastation on display, Hamas's military wing declared its intention to continue the fight. In a news conference yesterday, spokesman Abu Obeidah, his face masked by a red checkered scarf, accused Israel of exaggerating the casualty estimates among militant fighters while masking its own losses. He said only 48 Hamas fighters had died in combat; Israel says it killed about 400.

The Israeli foreign minister, Tzipi Livni, warned Hamas against firing rockets. "If Hamas fires one Kassam to the south or anywhere else in Israel, it will be struck again, and Hamas knows it," she said on Israeli radio.