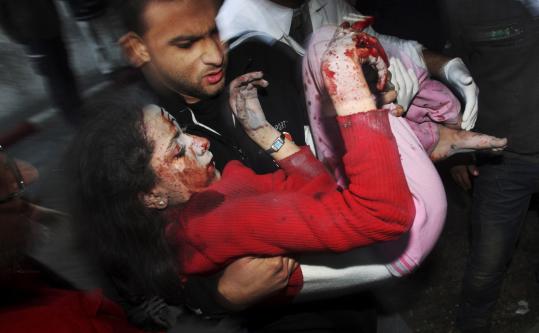 Late in the day, Israeli troops entered densely populated areas just north and east of Gaza City, the territorial capital. Witnesses said they took up rooftop positions on several six-story buildings on the outskirts of the city, which has a population of 400,000.

Israel continued to resist diplomatic efforts for an immediate halt to the assault, now in its 11th day. Israeli leaders said the fighting was inconclusive and could go on for days, if not weeks.

Hamas, too, vowed to keep fighting and fired at least 31 rockets into Israel yesterday, including one that struck an empty kindergarten in the city of Ashdod.

The Israeli offensive is aimed at halting years of rocket fire into southern Israel by Palestinian militants that terrifies tens of thousands of residents of the Jewish state. Hamas, an Islamic group whose charter calls for Israel's destruction, seized control of Gaza from its Palestinian factional rivals in mid-2007, two years after Israel unilaterally withdrew its settlements and military bases.

After eight days of air raids, Israel sent tanks and troops into the 140-square-mile territory Saturday.

As Israeli jets and naval ships bombarded the southern part of the strip, striking tunnels used to bring in weapons from Egypt, tank and infantry units punched into the north. They met limited resistance over the weekend while moving cautiously through open fields toward Hamas' urban strongholds a few miles away.

"Hamas did not seek a direct confrontation with our forces," Defense Minister Ehud Barak of Israel told a parliamentary committee yesterday morning. "They want to drag us into urban areas. The main test could still be ahead."

Heavy air and artillery fire erupted after dark near Jabaliya as Israeli forces battled for control of a hill overlooking that city and its sprawling refugee camp.

Another heavy clash was reported in Shajaiyeh, on Gaza City's eastern outskirts.

The Israeli military said its forces have killed or wounded "dozens" of militants in the ground operation while losing one of its own soldiers. Early today, the military said three more of its soldiers were killed, and 20 wounded, by "friendly fire" when an Israeli tank fired on a building that the soldiers had occupied in the northern Gaza Strip, Reuters reported.

Hamas has released no casualty figures, but Palestinian medical officials said civilians account for about half the 125 deaths they have recorded since Saturday.

At least 550 Palestinians in Gaza have been reported killed in the past 10 days. About one-fourth of them are civilians, according to UN estimates.

Eight Israelis have been killed in that period, including the three soldiers by friendly fire and three civilians hit by cross-border rocket fire. A senior Israeli military official said the fighting in Gaza "is very complicated because there are a lot of tunnels, a lot of bunkers, a lot of booby traps."

Hamas has given few accounts of the fighting. Its leaders are in hiding and make sporadic appearances on Hamas TV. One leader, Mahmoud Zahar, surfaced in a grainy video yesterday, exhorting Palestinians to take revenge.

Major Avital Leibovich, an Israeli military spokeswoman, said Hamas was to blame for civilian casualties because it operates in densely populated areas.

Foreign Minister Tzipi Livni of Israel rejected the appeals, saying the military needed more time to subdue Hamas. "We are not asking the world to take part in the battle; we are only asking to be allowed to carry it out ourselves until we reach a point in which we decide our goals have been met," she said at a joint news conference with Schwarzenberg.

Israeli government spokesman Mark Regev said the offensive has three objectives: to "substantially destroy" Hamas's military apparatus, break its will to fire more rockets, and bring about a new security arrangement with Egypt to prevent Hamas from bringing weapons into Gaza through the smuggling tunnels under the border.

He said she had discussed it by phone over the weekend with 17 leaders in Europe and the Middle East.

Rice's proposal calls for a halt to Hamas's rocket attacks and an arrangement to deal with the tunnels. It also addresses Hamas's main demand - ending an Israeli blockade of Gaza - by proposing a reopening of crossing points on the Israel-Gaza border.

Regev said Israeli leaders had been in contact with Rice and with Egyptian officials, but he declined to comment on her proposal.