Up to 300 dead in latest strikes against Hamas 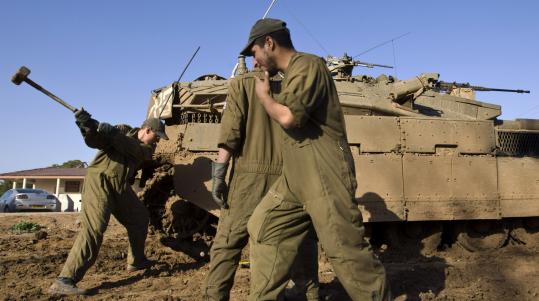 GAZA CITY - Israeli aircraft pounded Gaza yesterday and today, increasing the death toll to nearly 300, as Israeli troops and tanks massed along the border and the government said it had called up reserves for a possible ground operation.

The continued strikes, which Israel said were in retaliation for sustained rocket fire from Gaza into its territory, unleashed a furious reaction across the Arab world, raising fears of greater instability in the region.

Much of the anger was also directed at Egypt, seen by Hamas and some nearby governments as having acceded to Israel's military action by sealing its border with Gaza and forcing back at gunpoint many Palestinians who were trying to escape the destruction.

Witnesses at the Rafah border crossing described a chaotic scene as young men tried to force their way across into Egypt, amid sporadic exchanges of gunfire between Hamas and Egyptian forces. Egyptian state television reported that one Egyptian border guard was fatally shot by a Hamas gunman. A Palestinian man was killed by an Egyptian guard near Rafah, Reuters reported.

In Gaza yesterday, officials said medical services, stretched to the breaking point after 18 months of Israeli sanctions, were on the verge of collapse as they struggled to care for the more than 600 wounded in the past two days.

At Shifa Hospital in Gaza City, women wailed as they searched for relatives among bodies that lay strewn on the hospital floor. One doctor said that given the dearth of facilities, not much could be done for the seriously wounded and that it was "better to be brought in dead."

The International Committee for the Red Cross appealed yesterday for urgent humanitarian assistance, including medical supplies, to be allowed to enter Gaza. Israeli officials said some aid had been allowed in through one of the crossings; on Saturday, Egypt temporarily opened the Rafah crossing to allow the wounded to be taken to Egyptian hospitals.

Israel made a strong push to justify the attacks, saying it was forced into military action to defend its citizens. At the same time, heated statements from the supreme leader of Iran and the leader of Hezbollah expressed strong support for Hamas.

Across Gaza, families huddled indoors as Israeli jets streaked overhead. Residents said that there were long electricity blackouts and that they had no cooking gas. Some ventured out to receive rationed bread at bakeries or to brave the streets to claim their dead at hospitals. There were few mass funerals; rather, families buried the victims in small ceremonies.

At dusk, Israeli fighter jets bombed more than 40 tunnels along Gaza's border with Egypt yesterday. The Israeli military said the tunnels that were attacked, on the Gaza side of the border, were used for smuggling weapons, explosives, and fugitives. Gazans also use many of them to import consumer goods and fuel in order to get around the Israeli-imposed economic blockade.

Over the past two days, Israeli jets destroyed at least 30 targets in Gaza, including the main security compound and prison in Gaza City known as the Saraya, metal workshops throughout Gaza that are suspected of manufacturing rockets, and Hamas military posts.

The Hamas-owned television station Al Aqsa was also struck, as was a mosque that the Israeli military said was being used as a terrorist base.

Israel appeared to be settling in for a longer haul. The government yesterday approved the emergency call-up of thousands of army reservists in preparation for a possible ground operation as Israeli troops, tanks, armored personnel carriers, and armored bulldozers massed along the border.

Speaking before the weekly Cabinet meeting in Jerusalem, Israel's defense minister, Ehud Barak, said the army "will deepen and broaden its actions as needed" and "will continue to act." Prime Minister Ehud Olmert said Israel's goal was not to reoccupy Gaza, which it left unilaterally in 2005, but to "restore normal life and quiet to residents of the south."

Tzipi Livni, Israel's foreign minister, appeared on yesterday's Washington talk shows to press Israel's case. She said on "Fox News Sunday’’ that the operation "is needed in order to change the realities on the ground, and to give peace and quiet to the citizens in southern Israel."

Militants in Gaza again fired barrages of rockets and mortar shells farther into Israel yesterday. One rocket fell in Gan Yavneh, a village near the major port city of Ashdod, almost 20 miles north of Gaza. Two others landed in the coastal city of Ashkelon. Several Israelis were wounded.

Fawzi Barhoum, a spokesman for Hamas, told reporters that Israel had started a "war" but that it would not be able to choose how it would end. He called for revenge in the form of strikes reaching "deep into the Zionist entity using all means," including suicide attacks.

Mahmoud Abbas, the president of the Palestinian Authority and the leader of Fatah, blamed Hamas yesterday for the bloodshed in Gaza and said it could have been prevented. The hundreds of thousands of Israeli citizens now within rocket range have been instructed by the authorities to stay close to protected spaces.

In Lebanon, the leader of the Shi'ite militant group Hezbollah, Sheik Hassan Nasrallah, put his fighters on alert, expressing strong support for Hamas and saying he believed Israel might try to wage a two-front war, as it did in 2006. He called for a mass demonstration in Beirut today. And he, too, denounced Egypt's leaders. "If you don't open the borders, you are accomplices in the killing," he said in a televised speech.