Ads focus on abuse of foreign servants by Saudis 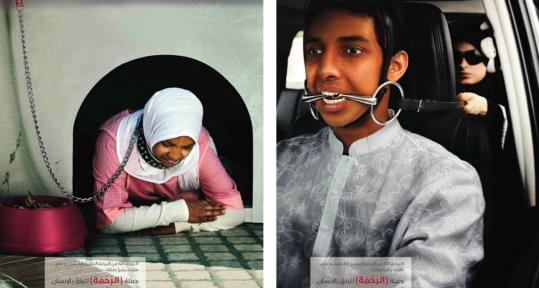 JIDDAH, Saudi Arabia - In each ad, the servants are depicted as animals.

In one, a woman in the back seat of a car tugs on reins attached to a bit in her Indian driver's mouth. In another, an Ethiopian maid kneels inside a doghouse in front of a bowl full of bones as her employer holds a leash around her neck.

The public service campaign recently launched in Saudi Arabia highlights the abuse of foreign domestic workers and urges their employers to treat them more humanely.

The man behind the television announcements and newspaper inserts says that it is time for Saudis to stop ignoring the issue and that their faith should compel them to act.

"We sometimes deal with our servants as if they were not human and have no feelings," said advertising executive Kaswara al-Khatib, who came up with the idea for the campaign after noticing how badly some Saudis treat domestic workers and foreign laborers. "There is rampant abuse in the kingdom. Enough denial."

Khatib said the slogan, "Have mercy so that you shall be shown mercy," is meant to remind Saudis that "good manners are an integral part of being a good Muslim."

"What I'm trying to point out is that there's an inherent contradiction in being a devout Muslim, praying five times a day and mistreating your servants," he said.

Khatib has been hailed as a hero as well as accused of anti-Saudi bias and of tarnishing the country's image.

A Facebook group supporting the campaign has attracted nearly 3,000 members, and newspapers and television channels have asked to use it since the ads first appeared on the Saudi-owned MBC satellite channels and in al-Hayat newspaper last month.

But writer Trad al-Asmari slammed the "mercy campaign" as inaccurate. Problems of mistreatment exist in many countries, Asmari wrote in al-Jazeera newspaper, but the campaign singles out "all Saudis as ugly and merciless."

In an editorial in al-Watan newspaper, Hassan al-Assiri wrote that "the campaign poses a very important question."

"Is it true that Saudis actually have no mercy? Have studies and polls . . . proven that the only way to treat the problem is by performing surgery on our consciences?" he asked.

Saudi Arabia has about 8 million foreign laborers, mainly from the Philippines, Indonesia, Sri Lanka, and the Indian subcontinent. About a quarter of them are domestic servants. Many households in this country of 28 million have several servants, including drivers for women, who are not allowed behind the wheel in the kingdom.

With advances in press freedoms since King Abdullah took the throne in 2005, newspapers have routinely published articles about domestic servants who have been beaten, raped, and sometimes killed.

Last year, Saudi police rescued an abused Sri Lankan maid after she contacted a newspaper. She had been confined and had not been paid for seven years. Newspapers reported in May that an Indonesian maid who had been tortured was found in an empty lot in Mecca, gagged, bound, and blindfolded. Her employer was later arrested.

A Human Rights Watch report in July criticized the treatment of domestic workers, who are not protected by labor laws.

The report said the workers often endure "non-payment of salaries, forced confinement, food deprivation, excessive workload, and instances of severe psychological, physical, and sexual abuse." The organization said embassies and other foreign missions receive thousands of complaints from domestic workers each year. Khatib said that despite the criticism, the response has been mostly positive. "Our society is becoming more mature and inward-looking," he said.