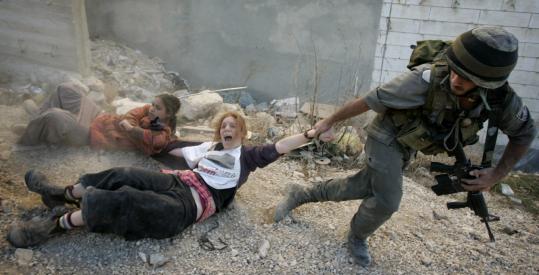 SEBASTIAN SCHEINER/ASSOCIATED PRESSAn Israeli police officer dragged two Jewish settlers from a disputed building in Hebron yesterday. Security forces stormed the building to remove some 200 hard-liners who had been occupying it since March 2007, when a deal for its purchase fell apart. (SEBASTIAN SCHEINER/ASSOCIATED PRESS)
By Ethan Bronner New York Times / December 5, 2008
Text size – +

HEBRON, West Bank - Israeli troops forcibly evicted about 200 hard-line Jewish settlers from a contested building in this volatile biblical city yesterday, the first serious clash in what seems to be a spiraling confrontation between the government and defiant settlers.

The operation, carried out by 600 soldiers and police officers with stealth and efficiency, took half an hour and left roughly two dozen slightly injured. But events did not end there. Young settlers rampaged through Palestinian fields and neighborhoods, setting olive trees ablaze and trashing houses.

Major Avital Leibovich, an Israeli army spokeswoman, said the southern part of the West Bank, known in Israel as Judea, was now designated as a closed military area, meaning only those who live there may enter, an effort to prevent outside settlers from causing further trouble. Within an hour of the order, long lines of cars were backed up at new military roadblocks.

The contested building, which occupants had dubbed "The House of Peace," is on the road to the Cave of the Patriarchs, where Abraham, Isaac, Jacob, and their wives are said to be buried, a site Muslims and Jews have coveted and fought over for centuries.

As the sun set, the area around the building looked like a war zone. Evacuees were still being dragged about, four police per person; rocks were strewn on the roadways; plumes of black smoke were rising from the olive groves; and hundreds of helmeted troops in riot gear were confronting a crowd of infuriated settlers.

The settlers were members of the religiously observant Jewish population in and around Hebron, several thousand among hundreds of thousands of Palestinians. As Palestinians watched from rooftops and windows, some settlers shouted at the troops, calling them Nazis. A few had sewn yellow stars on their shirts, as Jews had been forced to under Hitler. On a wall near the site of the confrontation, Hebrew graffito declared: "There will be a war over the House of Peace."

Much is at stake for both sides in this confrontation. The Israeli government says it wants to facilitate the building of a Palestinian state in most of the West Bank, while the settlers and their supporters say they will do all in their power to prevent such a state. The settlers are trying to increase their numbers in Hebron, second only to Jerusalem in its historic and religious significance to them.

The four-story building in question was built and owned by a Palestinian who had agreed to sell it. After reaching the agreement to sell, he backed out of the deal, saying that he had been unaware the buyers were Jews and that he had been tricked. The settlers say he knew very well what he was doing, but was claiming otherwise because threats had been made against him.

The Israeli government ordered the settlers out. They challenged the order. Three weeks ago, the Supreme Court took the government's side in a 3-0 ruling and gave it 30 days to make good on the order. In the past week or two, settlers had grown more rebellious, throwing rocks at soldiers and defacing Palestinian buildings and graves. It was clearly only a matter of time before the army would step in.

The official who made the call for the evacuation yesterday was Ehud Barak, the defense minister and head of the Labor Party, who said at a news conference later that "what was tested today was the ability of the state to enforce its laws and its essence upon its citizens."

Barak had met with settler leaders in the morning to find a way out of the confrontation. The settlers emerged from the meeting believing there was still negotiation to be done, but Barak clearly thought otherwise.

Since elections are scheduled for February and Barak is his party's leader, opponents of the evacuation accused him of seeking political advantage through his decision.

"Barak sent the army and police as part of the left wing's election campaign, and the blood of the casualties is on his hands," declared Arieh Eldad of the National Religious Party.

Settler leaders were indignant, saying Barak had tricked them after talking soothingly to them in the morning. They said there was nothing more scandalous in the land of Israel than for Jews to evict Jews from their homes.

In a separate development yesterday, the Israeli government agreed for the first time in four weeks to allow journalists and foreign aid workers to enter Gaza.

The area, ruled by the militant Hamas group, is under a closure led by Israel that severely limits goods and people from going in and out. But only recently did the closure include foreign journalists, who had appealed to the government and Supreme Court for permission to enter.