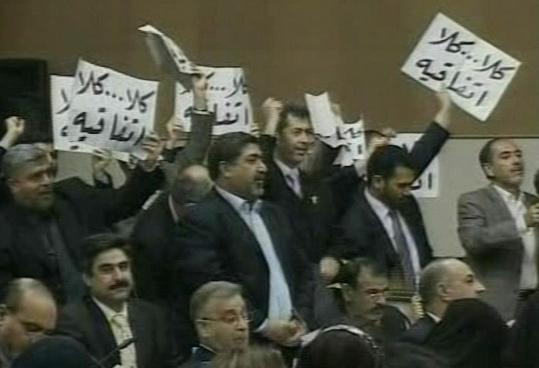 Sadrist lawmakers with placards that read ''No, no to the agreement'' reacted in Iraq's Parliament in Baghdad, after lawmakers approved a security pact with the United States that allows American troops to stay in the country for three more years. (APTN/associated press)
By Tina Susman and Raheem Salman Los Angeles Times / November 28, 2008
Text size – +

BAGHDAD - Iraq's Parliament approved a three-year timetable yesterday for the withdrawal of US troops, a pact supporters call a path to sovereignty and opponents say could be used to keep Americans on Iraqi soil indefinitely.

The pact is the first step taken by Iraqi legislators toward ending the US presence in their country since the American-led invasion in March 2003. It is expected to be ratified by Iraq's three-person presidency council.

The vote, held above the din of detractors shouting "No!" and bashing books and binders on desks, followed intense negotiations among the nation's Sunnis, Shi'ites, and Kurds that portend fierce political battles.

Prime Minister Nouri al-Maliki, a Shi'ite, will be held to promises of political reform made to Sunnis in exchange for "yes" votes.

Kurds could use the promises to press their own demands for autonomy from a central government they see as too strong. And hard-liners loyal to Shi'ite cleric Moqtada al-Sadr - who opposed the pact, fearing it will allow for an open-ended American presence - have warned of renewed violence against US forces by Shi'ite militiamen.

Of the 198 lawmakers present, 149 raised their hands in favor of the "Status of Forces Agreement," or SOFA.

To win backing from the main Sunni Arab blocs in Parliament, Maliki's ruling Shi'ites and their Kurdish allies approved a resolution agreeing to consider a "wish list" rooted in Sunni complaints of political sidelining and persecution. The demands range from amnesty for detainees - many of them Sunnis - held since the US invasion to the incorporation of the mainly Sunni paramilitary group the "Sons of Iraq" into government security forces or other jobs.

Rasheed Azzawi, a member of the main Sunni bloc, Tawafiq, acknowledged there was no guarantee the issues would be resolved. The resolution passed by Parliament does not include a timetable or methods for dealing with complaints. But Azzawi said it "will bind the sides morally" to take action beyond mere words.

"If they don't, we will press constitutional and law charges," he said.

The Sunnis could face problems down the line. They also demanded, and got, promises of a public referendum on the Status of Forces Agreement in July.

If voters reject it, Iraq's government would have to cancel the accord or seek changes to it, possibly leading to a pullout of US forces earlier than the Dec. 31, 2011, deadline. That would leave Sunnis without the extra protection the United States offers against the Shi'ite-led government and security forces, where grudges left over from Saddam Hussein's Sunni-led regime run deep.

Earlier in the week, Sadrists opponents had stalled discussions on the Status of Forces Agreement and engaged in a near-brawl with other lawmakers as they sought to prevent parliament from moving ahead with the pact.

Yesterday, their chants and desk-pounding nearly drowned out the reading of the Status of Forces Agreement bill and accompanying legislation. After the vote, many of the bloc's 30 members convened a news conference wearing black sashes of mourning and vowed to keep up political resistance.

Maliki's government, however, has portrayed the deal as a surefire path to sovereignty. In a televised address, the prime minister vowed to make sure Iraq's security forces were brought up to speed quickly to take over from departing American forces.

"We have crossed an important milestone," he said. "It represents the first step in our march to restoring sovereignty."

President Bush said in a statement from Camp David, where he was celebrating Thanksgiving with his family, that the vote "affirms the growth" of democracy in Iraq.

US and Iraqi negotiators took nine months to reach the Status of Forces Agreement, and it came after the Bush administration made substantial concessions. They included agreeing to Iraqi dates for the withdrawal of US forces after initially demanding a "time horizon" that set no specific targets.

The pact requires combat troops to leave Iraqi cities, towns, and villages by June 30, 2009, as the first step toward total withdrawal. It also limits US troops' ability to conduct missions, raids, or arrests without Iraqi authority and opens the door to Iraqi courts to handle some criminal cases involving American troops.

Maliki could probably have won approval without the Sunni support, but he sought to make the deal acceptable to the country's Sunnis and burnish the pact's legitimacy. Whether that worked won't be known until the referendum.

Iraqis following the negotiations were as split as the Parliament on the topic.

"This is a bad day and a bad omen," said Qassim Hussein, echoing Sadrist concerns that the Americans would dodge the pact's withdrawal deadlines.

Abu Mohammed disagreed. "The pact is good because the US forces will pull out and prisoners will be released," he said. "I think everything is solved."

The deal followed protracted negotiations between US and Iraqi negotiators. It was delayed for revisions after the country's most influential Shi'ite cleric, Grand Ayatollah Ali al-Sistani, indicated that it would be acceptable only if passed by a comfortable majority.

After the vote, government spokesman Ali al-Dabbagh urged those who opposed the agreement to accept the decision by the parliament.

US Ambassador Ryan C. Crocker and General Ray Odierno, the top American commander in Iraq, welcomed the approval of the pact, which is divided into two agreements governing security, economics, culture, and other areas of cooperation.

"Taken together, these two agreements formalize a strong and equal partnership between the United States and Iraq," they said in a statement. "They provide the means to secure the significant security gains we have achieved together and to deter future aggression."

The war has claimed more than 4,200 American lives and killed a far greater, untold number of Iraqis, consumed huge reserves of money and resources, and eroded the global stature of the United States, even among its closest allies.

Now an end is in sight, and American troops could leave sooner if President-elect Barack Obama makes good on a plan to pull out combat troops within 16 months of moving into the White House in January.