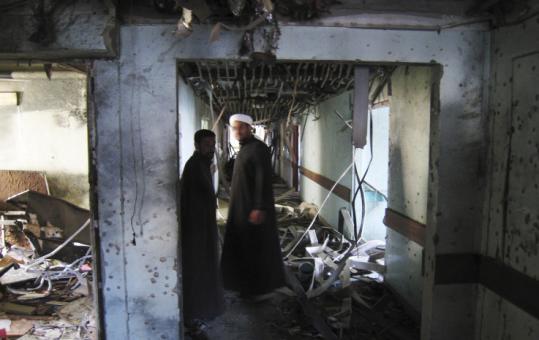 In a suburb of Fallujah, Iraqis inspected the wreckage at a hospital where a suicide bomber killed three people yesterday. (Associated Press)
November 10, 2008
Text size – +

BAGHDAD - A double bombing in the the capital killed at least 22 people and wounded 42 others today, police said.

The bombs struck during morning rush hour in the northern part of the city. The first struck a passenger bus. The other blast occurred about 50 yards away as people rushed to help the wounded, authorities said.

Bombs killed at least eight people yesterday across Iraq and wounded dozens of others, officials said. Syria's president blamed the US military presence for Iraq’s instability and called on US troops to leave.

In the northern city of Mosul, a roadside bomb hit an Iraqi army patrol soon after sundown, killing three soldiers and wounding four others, police said.

US and Iraqi troops have been fighting for months to clear Al Qaeda in Iraq and other Sunni insurgent groups from Mosul, Iraq's third largest city.

To the south, a bomb attached to a bike wrapped in a trash bag exploded outside a cafe in Khalis, 50 miles north of Baghdad, killing at least two people and wounding 13, including the city mayor, police said.

The cafe is located in a market area that includes a public health clinic and the precise target was unclear. Khalis is a mostly Shi'ite town surrounded by Sunni communities and was a hotbed of Sunni-Shi'ite fighting in 2006 and 2007.

In Anbar Province, a suicide bomber blew herself up at a hospital in a suburb of Fallujah, about 40 miles west of Baghdad.