US officials gather data for arrests 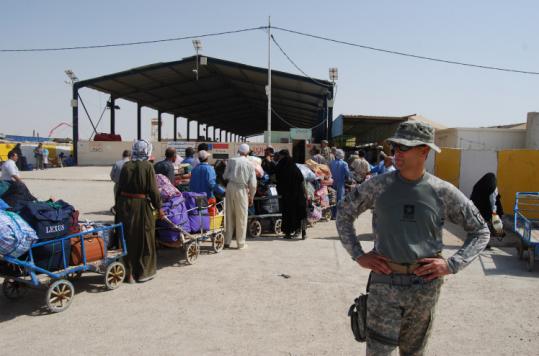 ZURBATIYAH, Iraq - For thousands of Iranians, traveling to Iraq through this bustling, dusty gateway now requires stopping at small white trailers where US officials take their photos and record scans of their irises and fingerprints.

US officials collect the biometric information of virtually all "military-age men" in an effort to stop the entry of weapons and fighters. Since officials began gathering biometric data at border posts this spring, more than 150,000 individuals have been scanned and photographed.

Their records have been added to a burgeoning database that also includes biometric information about Iraqis and foreigners employed on American bases, as well as Iraqis who are detained or interrogated by US forces. American officials use the data to identify people on wanted lists, search for suspicious travel patterns, and look for matches in a separate database that includes fingerprints collected after bombings and other attacks.

"It's a bad situation," said Hamid Alavi, 27, an Iranian pilgrim, voicing exasperation about the increased US military presence at Zurbatiyah. "The American people - do they like this behavior? It's sad."

Twenty-eight teams of US military officials, customs experts and former US Border Patrol agents working as private contractors have been sent to small outposts along Iraq's 2,270-mile border, where US officials also employ ground sensors linked to satellite cameras and unmanned aerial vehicles.

US officials say the dragnet has led to the detention of hundreds of "adversaries" and yielded a clearer understanding of smuggling networks. Officials plan to double the number of border teams by the end of the year.

"Internal security is getting much better," said Lieutenant Colonel Steven Oluic, who serves as a liaison between the teams and top US commanders in Baghdad. "Now what needs to happen is we need to help them shut down the borders to malign influence. Borders are now the hot issue."

A US Government Accountability Office report issued last month faulted US military officials for not having a standard for the types of data collected by troops in combat zones and not having better mechanisms to share the data with other federal agencies. US military officials in Iraq and Afghanistan have collected biometric information from more than 1.5 million people.

The US program is largely separate from Iraq's halting efforts to control its borders. The government has allocated hundreds of millions of dollars to build up border and customs agencies, but Prime Minister Nouri al-Maliki recently took direct control of the customs bureaucracy because of corruption concerns.

The Zurbatiyah port of entry, east of Baghdad, is one of Iraq's busiest. Iranian trucks, which are not allowed to cross into Iraq, line up early in the morning at a parking lot on the Iranian side, where cargo is loaded onto Iraqi vehicles.

Hundreds of Iranian tourists, mainly pilgrims bound for the Shi'ite holy cities of Najaf and Karbala, are dropped off on the Iranian side each day. Older travelers are carried on wobbly metal carts loaded with bulging suitcases.

Military-age men must pass through a trailer, where US soldiers sit behind laptop computers emblazoned with a bat symbol, a reference to the acronym of the system: Biometrics Automated Toolset. The scanning and photography take a few minutes. In some cases, officials use a second scanner with facial recognition software.

US officials began crafting a border security strategy in late 2005 to stem the flow of weapons and would-be suicide bombers into Iraq from Syria. But since last year, Iraq's 900-mile border with Iran has become the top priority: US officials have accused Iran of arming, training and financing militias in Iraq, a charge Iranian officials have consistently denied.

Though the borders remain porous, US officials say the new measures have contributed to the sharp reduction of violence in Iraq this year by forcing fighters and smugglers to use more remote and dangerous routes.

The outposts along the border are among the most isolated and perilous in Iraq for US officials.

In March, a man wearing an explosives vest targeted the biometrics intake center at the Rabiyah post on the border with Syria. He killed one interpreter and wounded two US soldiers, two customs officials and two civilians employed by the US military.

"We know that we're disrupting it," said General Jeffrey Buchanan, a commander of the division that oversees operations south of Baghdad, referring to the passage of weapons and fighters. "I'm not going to tell you we've shut it down. But we have a much better understanding of the smuggling networks than we did six months ago."