Debate suggests culture of excess has its limits 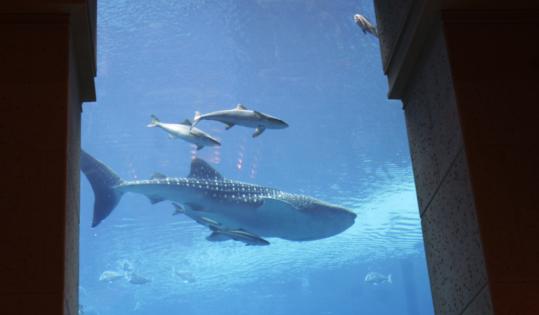 Environmentalists have called on the managers of a massive new marine-themed resort in Dubai to release a whale shark they are holding inside a giant fish tank. (Kamran Jebreili/ Associated Press)
By Ellen Knickmeyer Washington Post / October 30, 2008
Text size – +

DUBAI, United Arab Emirates - One day this summer, a fisherman spotted a 14-foot shark off this high-rise Persian Gulf boomtown. The dots on the creature's back showed she was a whale shark, an internationally protected species.

The fisherman had been charged with finding exotic fish for the aquariums and water park at a $1.5 billion, ocean-themed resort here, according to the United Arab Emirates' Environment Ministry.

Today, the shark is the star attraction in a tank in the black marble lobby of the newly opened Atlantis, a project of a state-owned development company and a foreign developer best known for founding the Sun City resort in apartheid-era South Africa.

Guests pay $7,500 a night to stay in Atlantis's Poseidon and Neptune suites, where a glass wall affords a private view of the whale shark and the smaller fish in her tank. Diners in a seafood restaurant enjoy the same view.

Developers are generally the unchallenged heroes of Dubai's $1 trillion-plus building boom. But the fate of the freckled gray shark has caught public attention, suggesting that even Dubai's culture of developer-driven excess has its limits.

An Emirates-based newspaper, the Gulf News, is waging a Free Sammy the Shark campaign. Editors said they named the shark before the hotel disclosed it was female.

Emirates residents started a Facebook campaign that has attracted more than 8,000 members. "This poor whale shark was caught off the shores of Dubai and needs to be put back where it belongs before she dies," its mission statement declares.

The shark has spent more than 50 days behind glass.

"There's not a true scientific reason to keep the whale shark in a tank. It's clear that they brought it as an attraction," said Azzedine Downes, the Dubai-based vice president of the International Fund for Animal Welfare. "To remove a female from the population just further endangers the species."

Spokeswomen in the United States and Dubai for the hotel's lead owner, Sol Kerzner of South Africa, did not return repeated calls for comment.

Whale sharks can live 70 years, dive more than 6,000 feet, and range for thousands of miles. They swim in both shallow and deep water, and researchers cite their curiosity.

They are the biggest fish on earth, growing as long as 65 feet. Despite their size, they are harmless to humans, feeding on small plants and animals that they sieve through their yardlong mouths. Trade in whale sharks is regulated by the Convention on International Trade of Endangered Species.

The Atlantis and the Environment Ministry say the captive shark is educating the public. In the hotel lobby, however, neither signs nor guides identify the shark for the tourists who pass through.

Watson and her friends were divided on the shark's confinement. "Maybe with the pollution, they're better here," said Delila Serret, also of Boston.

"I love to see them, but I think they should be the same as birds - free," Watson said.

Hotel spokeswoman Ashley McBain denied a recent announcement by the environment minister that Atlantis had agreed to free the whale shark. "At some point the whale shark could be released," she said.

A government-owned company, Nakheel, is the other main developer of the Atlantis in Dubai.

Kerzner has withstood controversy before. His Sun City resort in South Africa inspired the Steve Van Zandt song that includes the refrain "I ain't gonna play Sun City" and became a symbol of international protests against South Africa's then-segregated government. The boycott lasted until apartheid ended in 1994; Sun City remains.