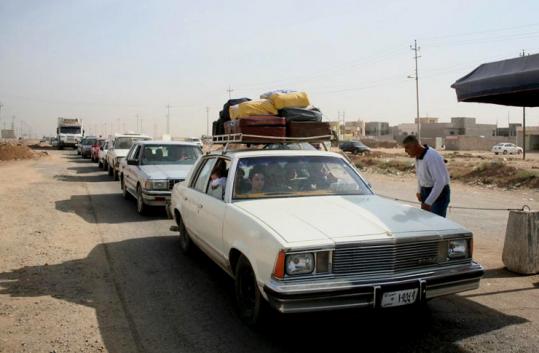 A Christian family, with a loaded-up car, stopped at a checkpoint east of Mosul yesterday in an attempt to flee. (Emad Matti/ Associated Press)
By Kim Gamel Associated Press / October 14, 2008
Text size – +

BAGHDAD - Cars and trucks loaded with suitcases, mattresses, and passengers cradling baskets stuffed with clothes lined up at checkpoints yesterday to flee Mosul, a day after the 10th killing of an Iraqi Christian in the northern city so far this month.

Nobody has claimed responsibility for the attacks, but local leaders have blamed Al Qaeda in Iraq, which maintains influence in the region despite an ongoing US-Iraqi military operation launched in May.

The latest victim was a music store owner who was gunned down Sunday evening at work in an attack that injured his teenage nephew, according to police and a neighbor.

Farques Batool, in his 50s, had refused to join other Christians fleeing the city because he needed to care for his wife, a daughter, his mother, and the family of his dead brother, his neighbor Raid Bahnam said.

Batool's family finally fled Mosul after his death, leaving his wounded nephew in the hospital.

With the killing of at least 10 Christians this month alone, according to police, thousands have abandoned their homes in Mosul to seek refuge in churches and with relatives in neighboring villages or in relatively safe Kurdish-controlled areas nearby.

Faraj Ibraham, 54, a power station employee who moved in with relatives in the village of Burtulla, said he was worried about his two daughters who had to leave school.

"We left in a hurry, and they forgot to bring even their books. It will be a heavy burden for them even if we get to return home soon," he said.

Islamic extremists have frequently targeted Christians and other religious minorities since the 2003 US invasion, forcing tens of thousands to flee Iraq - although attacks slowed with a nationwide decline in violence.

The reason for the latest surge in attacks was unclear. But it coincides with strong lobbying by Christian leaders for Parliament to restore a quota system to give religious minorities seats on the provincial councils to be chosen by voters before February.

UN special representative Staffan de Mistura strongly condemned "the spike in violence that has targeted the Christian communities in recent days" and warned that the attacks were seeking to "fuel tensions and exacerbate instability at a critical time."

Chaldean Archbishop Louis Sako of the northern Iraqi city of Kirkuk denounced "a campaign of liquidation and violence, with political objectives."

Monsignor Shiemon Warduni appealed to "all the brother Muslims in Mosul, Baghdad, and in Iraq" to do everything possible to end "this painful campaign," according to Vatican Radio.

Local organizations, meanwhile, appealed for help as they faced a flood of internal refugees.

"Thousands of people fled virtually overnight, many with only the clothes on their back," said Jamil Abdul-Ahad, the head of an interfaith Christian council in Mosul.

For many Christians, this was not enough.

"Our situation needs active work, not just media propaganda from government officials," Abdul-Ahad said. "The government should protect Christians in Mosul and safeguard their rights."

"Fear spread because of threats from Al Qaeda and 'Takfiris' [Sunni extremists] toward Christians and the assassinations of some of them," Governor Duraid Mohammed Kashmoula said.