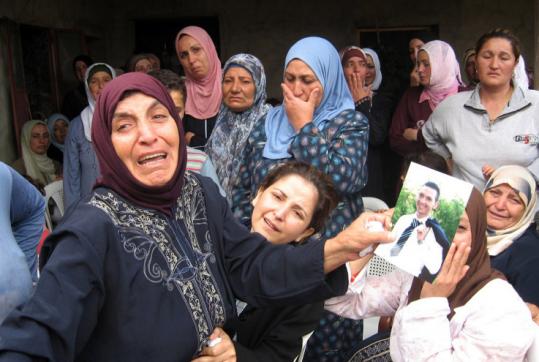 The mother of a Lebanese soldier displayed a picture of her son as she mourned his death outside her house yesterday. (AFP/ Getty Images)
By Borzou Daragahi Los Angeles Times / September 30, 2008
Text size – +

BEIRUT - Lebanese and Syrian authorities yesterday each placed blame for recent bombings on Islamic militants tied to Al Qaeda and probably based in a Palestinian refugee camp in Lebanon.

Yesterday, a roadside bomb struck a military bus in the northern Lebanese city of Tripoli, killing four Lebanese soldiers and a civilian and injuring 30 people, Lebanese officials said. The attack came two days after a 440-pound bomb detonated in a pedestrian area of Damascus, the Syrian capital, killing 17 people.

A senior Lebanese security official said authorities suspect that Jund al Sham, a militant group that was detected first in Afghanistan during the late 1990s and surfaced in Lebanon around 2004, is responsible.

The official said the bombings were revenge for the Lebanese military's defeat last year of Fatah al Islam, an ally of the militant group, in a months-long battle around the Palestinian refugee camp of Nahr el Bared.

"They are declaring a terrorist war against the Lebanese army to avenge the battle of Nahr el Bared and to demoralize the army and regain the influence that they lost in the last battles," said the official, who requested anonymity.

"They are not an organization that has a known command or known spokesman. They're linked to Al Qaeda and have bases in the Palestinian camps."

Syrian officials yesterday also suggested that evidence pointed to an Islamic group in Lebanon for the deadly weekend car bomb explosion in Damascus, although they did not name the group.

In an official statement, Syria said the explosives-packed vehicle had entered the country a day before the bombing and the alleged driver, who died in the blast, was linked to the group by suspects in custody.

Syrian authorities have asserted that mostly Sunni northern Lebanon has become a hotbed of Islamic extremism, drawing some veterans of the Iraqi insurgency.

Radical Sunni groups, often members of the puritanical Salafi movement, have been increasingly active in Lebanon, angered by the perception that the army is allied with the Shi'ite militia Hezbollah and that Lebanon's Sunni leader, Saad Hariri, is ineffectual.