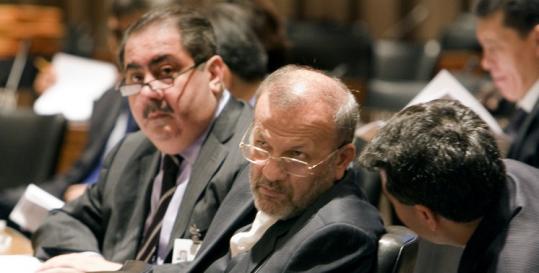 BAGHDAD - Iraqi police fatally shot a Kurdish politician in one of Iraq's most volatile provinces yesterday, a killing that underlines the growing tensions between Kurds and Arabs in parts of the north.

Even as Iraq has seen a sharp decline in Sunni-Shi'ite sectarian violence, hostility is deepening between Kurds and Arabs in Iraq's north as Kurdish authorities begin to exert more authority beyond the boundaries of their autonomous region.

Riya Qahtan, a member of the Kurdistan Democratic Party, was killed yesterday morning in Jalula, a small town 80 miles northeast of Baghdad in the ethnically mixed province of Diyala, said Jabar Yawer, a spokesman for the Kurdish military, or peshmerga. Jalula has a mostly Sunni Arab population with a substantial Kurdish minority.

The shooting occurred after two Sunni Arab police officers stopped three members of the Kurdish secret service at a market and demanded they show identification. They refused, and within minutes police reinforcements arrived at the scene, arrested them, and took them to police headquarters, Yawer said.

Qahtan then went to the police station and persuaded officers to release the detainees, who had been working as guards for his party. But as the group was leaving, two police opened fire and shot Qahtan, Yawer added.

The two police officers were being investigated as suspects in the shooting, a police official said on condition of anonymity because he was not authorized to speak to reporters.

The US military also said a soldier died southeast of Baghdad when his vehicle rolled over.

At the United Nations yesterday, Secretary of State Condoleezza Rice and Foreign Minister Hoshyar Zebari of Iraq said the two countries are closer to completing an agreement on presence of US troops in the country.

Less than a week after the resumption of negotiations on the deal in Baghdad, the two top diplomats said they hoped for a conclusion soon.

"We are very close," Zebari said as he sat down for talks with Rice on the sidelines of the UN General Assembly. "This will need the support of all the political leaders to get this agreement."

Rice also said progress was being made but cautioned that the talks were difficult and noted that the United States still was seeking assurances on legal protections for US troops in Iraq.

"We need certain protections for our forces so that we can continue the gains that we've been making, but we are also working in the context of a long-term strategic framework that will make us allies and friends for a long, long time to come," she said.

Rice also congratulated Zebari for improvements in security in Iraq, which she attributed largely to the increasing role Iraqi troops and police are taking.

Zebari said Friday that his government hopes to sign the agreement before the US election on Nov. 4 because the chance to complete it while President Bush is in office is narrowing.

The proposed agreement, under negotiation for most of this year, would replace the current UN mandate that expires Dec. 31. Any agreement must be ratified by the Iraqi parliament.

Sticking points include objections to immunity for US troops and private contractors, and oversight over US forces during raids and detentions.