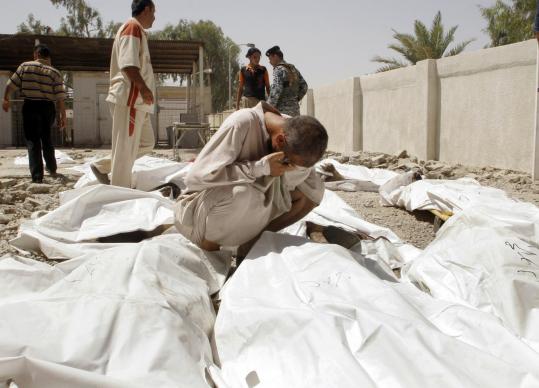 BAQUBAH, Iraq - Scattered sandals and overturned bicycles were all that remained hours after suicide bombers struck the Saad military camp.

Medical staff had finished unloading the white body bags at the nearby hospital, where the wounded moaned on bloodstained floors and weeping soldiers kneeled over slain comrades.

The twin blasts in Baqubah recalled the scenes of mass terror and grief that were almost a daily routine before last year's steep decline in violence.

In an old tactic of Sunni extremists, two suicide bombers set off explosives among the army recruits yesterday, killing at least 28. Violence also flared in the northern city of Mosul, where a dozen people died in bombings that targeted the Iraqi police and army.

The attack in Baqubah, capital of Diyala Province, came ahead of a planned Iraqi military offensive to halt attempts by militants to regroup in the volatile area northeast of Baghdad. The US military said that an American soldier was killed yesterday by a bomb while searching a house in the province, but gave no other details.

Diyala is critical to Baghdad's security because of its strategic importance as an entrance to the capital and a threat to supply routes going north. The ethnically mixed area also borders Iran, which the United States has accused of helping militants to stage attacks on American troops.

US military officials said yesterday's attack did not reflect any increase in militant strength in the area.

"I don't think this changes the security situation. It's just an isolated incident. This is the way Al Qaeda grabs attention," said Major Jay Gentile, with the Second Stryker Cavalry Regiment.

The Saad camp lies in an area with a large Shi'ite population on the eastern outskirts of Baqubah. Sunni militants have often targeted Shi'ites with suicide bombings.

The bombing occurred in a field outside the entrance to the joint US-Iraqi base, where recruits were signing up.

Witnesses said an initial explosion at about 8 a.m. drew a crowd that tried to evacuate victims. A second bomber then detonated his explosive vest among the rescuers.

"I lifted one of the wounded, and while I was carrying him away from the site, another explosion took place. I got hurt and the injured man suffered more injuries," said a man who did not want to be named because of safety concerns.

The explosions killed 28 people and wounded at least 57 recruits, a police official said. An Iraqi military officer in Baqubah, 35 miles from Baghdad, said soldiers were among the casualties.

It was the bloodiest attack in Iraq since June 17, when a truck bombing killed 63 people in Hurriyah, a Baghdad neighborhood that saw some of the worst Shi'ite-Sunni slaughter in 2006.

Last year, US troops largely subdued militancy in Baqubah, but many insurgents appear to be regrouping. In western Mosul yesterday, a bomb near an Iraqi police station killed four Iraqi civilians, the US military said. Half an hour later, one Iraqi police officer and seven civilians died in a suicide car bombing in the east of the city, the military said.

Three other bombs in Mosul wounded 15 people, including 11 police and soldiers, Iraqi authorities.

Also yesterday, the US military said it had captured the Iranian-trained leader of an explosives cell in the Azamiyah district of Baghdad. It said the suspect has been linked to attacks against US and Iraqi bases in the capital.