Envisioned as part of security accord; Plan would hinge on forces' readiness 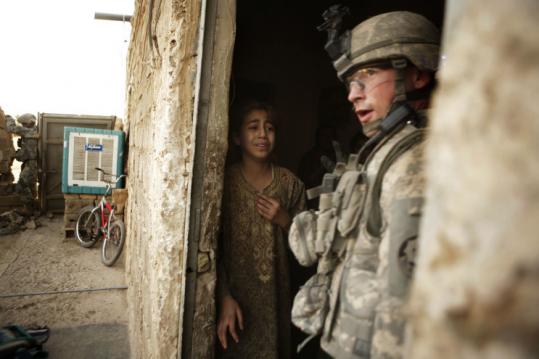 BAGHDAD - Iraq's prime minister said yesterday his country wants some type of timetable for a withdrawal of American troops included in the deal the two countries are negotiating.

It was the first time that Prime Minister Nouri al-Maliki has explicitly and publicly called for a withdrawal timetable - an idea opposed by President Bush.

He offered no details. But his national security adviser, Mouwaffak al-Rubaie, told the Associated Press that the government is proposing a timetable conditioned on the ability of Iraqi forces to provide security.

The White House said it did not believe Maliki was proposing a rigid timeline for US troop withdrawals.

"Any agreement would not have any hard timetables for withdrawal, but could include the desire by the US and Iraq to withdraw troops based on conditions on the ground," National Security Council spokesman Gordon Johndroe said.

"I know that Prime Minister al-Maliki has said that he doesn't want a precipitous withdrawal because of the security consequences," Johndroe said in Toyako, Japan, where President Bush is attending the G-8 summit.

Maliki said in a meeting with Arab diplomats in Abu Dhabi that his country also has proposed a short-term interim memorandum of agreement rather than the more formal status of forces agreement the two sides have been negotiating.

The memorandum "now on the table" includes a formula for the withdrawal of US troops, he said.

"The goal is to end the presence [of foreign troops]," Maliki said.

Obama, speaking aboard his campaign plane yesterday, said Maliki's view "is consistent with my view about how withdrawals should proceed and how a status of force agreement should not be structured without congressional input and should not be rushed."

The Iraqi leader's remark "is encouraging partly because of the extraordinary work of our troops on the ground in Iraq and improvements in the situation when it comes to Iraqi forces," Obama said. "The prime minister himself now acknowledges that in cooperation with Iraq, it's time for American forces to start sending out a time-frame for the withdrawal, and I hope that this administration as well as John McCain is listening."

Randy Scheunemann, a senior foreign policy adviser to the McCain campaign, issued a statatement yesterday saying that McCain "has always said that conditions on the ground - including the security threats posed by extremists and terrorists, and the ability of Iraqi forces to meet those threats - would be key determinants in US force levels."

"As Iraq's national security adviser said as recently as yesterday," Scheunemann said, "the Iraqi government was proposing a timetable that would be conditioned on the ability of Iraqi forces to provide security. Unlike Senator Obama's constantly shifting positions, Senator McCain has been consistent in arguing that the US presence in Iraq should be based on sound judgments of the situation in Iraq."

Some type of agreement is needed to keep US troops in Iraq after a UN mandate expires at year's end. But many Iraqi lawmakers had criticized the government's attempt to negotiate a formal status of forces agreement, worried that US demands would threaten the country's sovereignty.

US officials have said little publicly about the negotiations with Iraq.

Admiral Michael Mullen, chairman of the Joint Chiefs of Staff, did not comment directly on the specifics when asked about it on a trip to Baghdad yesterday.

"We'd all like to see US troops get out of here at some point in time," Mullen said. "However, from a military perspective I need the laws and the regulations and the agreements from the government of Iraq in order to continue operations beyond the 31st of December of this year."

With the latest moves, Iraq's government appeared to be trying to blunt opposition in parliament to any deal.

Maliki also could be trying to avoid parliament altogether. He has promised in the past to submit a formal agreement with the United States to the legislative body.

But his spokesman indicated yesterday that the government might feel no need to get approval from parliament for a shorter-term interim deal.

"It is up to the Cabinet whether to approve it or sign on it, without going back to the parliament," said spokesman Ali al-Dabbagh.

Legal experts said the form of the deal was less significant than its substance.

"You could theoretically include everything in a memorandum of understanding that you could in a formal status of forces agreement," said Michael Matheson, an expert on international law at George Washington University Law School.

The Bush administration has said it doesn't need congressional approval even for a full status of forces agreement - a position criticized by some US lawmakers.

The contentious issues have been US authority to carry out military operations in Iraq and arrest the country's citizens, along with legal immunity for private contractors and control of Iraqi air space.

Iraqi Foreign Minister Hoshyar Zebari said last week after a visit to Washington that the United States had agreed to drop immunity for private contractors and give up control of Iraqi air space if Iraq guaranteed it could protect the country's skies.

But those concessions, never confirmed by the US side, were apparently not enough to cement a formal agreement, leading Iraq instead to pursue the memorandum.

Iraq's government has felt increasingly confident in recent weeks about its authority and the country's improved stability.

Violence in Iraq has fallen to its lowest level in four years.

Sasha Issenberg and Lisa Wangsness of the Globe staff contributed to this report.