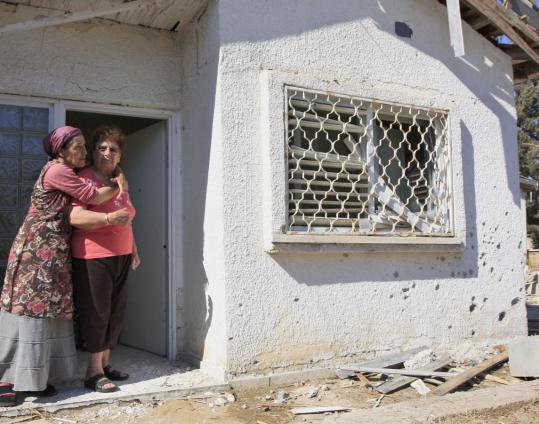 Despite what it called a "gross violation" of the truce, Israel refrained from military action and said it would send an envoy soon to Egypt to work on the next stage of a broader cease-fire agreement: a prisoner swap that would bring home an Israeli soldier held by Hamas for more than two years.

Hamas, the militant Islamic group that rules Gaza, promised to rein in the Iran- and Syria-backed faction that carried out the rocket attacks and pledged to remain committed to the truce that went into effect June 19 and urged restraint by all sides.

The fact that the cease-fire held up despite the severe strain was an indication that both sides had a lot at stake in the negotiations for a broader agreement. Hamas wants to show it can break the Israeli blockade and provide much-needed relief to Gaza's beleaguered residents, while Israel wants to stop the daily rocket fire that has disrupted the lives of thousands of its citizens.

The midafternoon barrage, which slightly wounded two people, capped a day of violence that presented the truce with its first serious test. Just before midnight, Palestinian militants fired a mortar shell into an empty area in southern Israel. And in a predawn raid, Israeli troops killed two Palestinians, one of them an Islamic Jihad area commander, in the West Bank city of Nablus.

Islamic Jihad, a militant group backed by Syria and Iran, claimed responsibility for the rocket fire from Gaza. Although the West Bank is not included in the truce agreement, the group said the rockets were retaliation for the Nablus raid.

"We cannot keep our hands tied when this is happening to our brothers in the West Bank," the group said.

A neighbor said a Palestinian bystander was also shot to death by troops when he opened the door of his apartment during the raid. The Israeli military said the man was a militant killed during a gun battle with troops.

Hamas accused Israel of provoking the rocket fire but moved quickly to lower tensions and said it would talk to Islamic Jihad to ensure quiet.

Israel took no military action but late yesterday decided to shut the crossings, cutting off shipments of basic supplies that had been increased as part of the truce deal, according to defense officials, speaking on condition of anonymity because the decision had not been made public. There was no word on when the crossings would be reopened.

In Berlin, the Quartet of Middle East peacemakers - made up of the United States, the European Union, the United Nations, and Russia - called for a cease-fire between Israel and militants in Gaza to be respected "in full" and voiced hope that the truce will last.

The Egyptian-brokered deal aims to end a year of violence that has killed more than 400 Palestinians, including dozens of civilians, and seven Israelis in a bloody cycle of Palestinian rocket attacks and Israeli reprisals.

Egypt hopes to mediate a deal in which Israel would release Palestinian prisoners in exchange for Sergeant Gilad Schalit, an Israeli soldier captured by Palestinian militants in a cross-border attack in June 2006.

Hamas's larger goal is for Israel to reopen Gaza's strategic border crossing with Egypt. The Rafah crossing has been sealed since the Hamas takeover, preventing the vast majority of Gaza's 1.4 million people from traveling in and out of the area. Israel has said Rafah will open only after the captured soldier returns home.

Israeli Prime Minister Ehud Olmert and Egyptian President Hosni Mubarak held talks yesterday in the Egyptian Red Sea resort of Sharm el-Sheik, focusing on the issues of the soldier and the crossing. An Israeli official with Olmert's delegation said Egypt gave assurances that Rafah would not open without the soldier's release.