Tehran criticized for its support of Hezbollah fighters 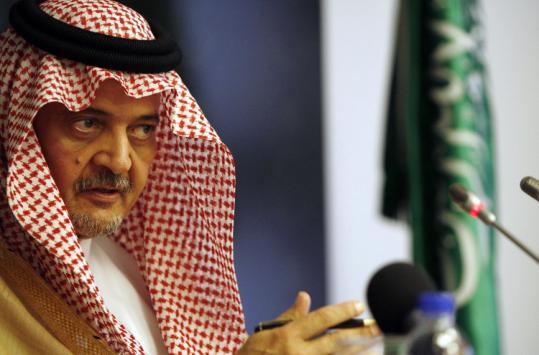 BEIRUT - Saudi Arabia sent Iran a sharp warning over Lebanon yesterday, saying Tehran's support for Hezbollah will damage its relations with other Muslim and Arab countries.

More soldiers fanned out through Beirut, with orders to use force to restore security to a nation shaken by nearly a week of sectarian clashes. Lebanese buried more of their dead and tried to resume life in a capital dissected by roadblocks.

What began as a political struggle more than a year ago with Shi'ite ministers bolting from the Cabinet devolved last week into Lebanon's worst fighting since the end of the 1975-1990 civil war, with at least 54 people dead and scores wounded.

"Of course, Iran is backing what happened in Lebanon, a coup, and supports it," Saudi Arabia's foreign minister, Saud al-Faisal, told a press conference in Riyadh, in the most pointed criticism of Tehran. "This will affect [Iran's] relations with all Arab countries, if not Islamic states as well."

President Mahmoud Ahmadinejad of Iran shot back by saying Saud's comments were made in anger and likely did not conform to the views of King Abdullah of Saudi Arabia. He said Iran was the only country that does not interfere in Lebanon's internal affairs.

President Bush weighed in earlier, telling Al-Arabiya television Monday that Washington would continue to support the Lebanese government and military, and would keep up pressure on Iran and Syria. The United States considers Hezbollah a terrorist organization and has repeatedly called for it to disarm.

As Bush travels to the Middle East today for a trip that includes visits to Saudi Arabia and Egypt, the flare-up is a sign that nervousness is growing about Iran's expanding influence.

Sunni Arab countries like Saudi Arabia and Egypt worry that Iran wants to flex its muscle and assume a larger and strategic role in the region - taking power and influence that was historically theirs.

Iran, in turn, accuses US-allied Arab countries like Egypt of merely bending to America's will and pushing its agenda in the region.

The growing tension has wide implications for American and Western goals in the region - with the West generally allied more with the Arab governments and also worried about Iran's intentions.

On the edge of Beirut yesterday, funeral processions snaked through mountain towns where civilians and combatants were buried.

An Arab League delegation was expected in Beirut this week to try to bring Lebanon's feuding parties toward consensus, and resolve a troubling political crisis that has left the country without a president since November.

Hezbollah revolted and drove out the government's Sunni supporters in street fighting that spread from the capital to mountains overlooking Beirut and even to the northern city of Tripoli. A cease-fire largely halted the clashes on Monday.