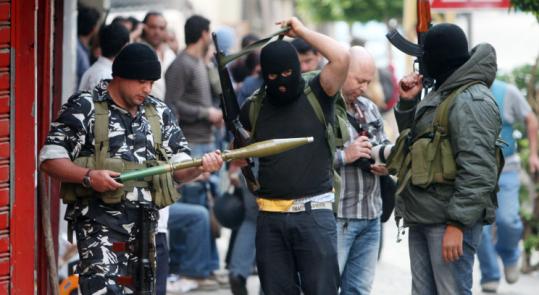 BEIRUT - Lebanon's long-simmering political crisis lurched deeper into violent civil conflict yesterday as rival bands of Shi'ite and Sunni gunmen battled in the streets for a second day and politicians took to the airwaves to denounce one another for pushing the country toward war.

Explosions and ferocious bursts of gunfire rattled central Beirut as groups allied with the Hezbollah-led opposition and the US-backed government fired machine guns, assault rifles, and rocket-propelled grenades toward each other and into the air in apparent shows of strength. The deep thuds of occasional mortar fire shook the earth as night fell.

Throughout the day, panicked civilians scurried for cover or loaded up on basic supplies, emptying supermarket shelves of frozen meats. Gunmen had blocked roads to the country's sole international airport as well as the main highways to Damascus, the capital of Syria, and to southern Lebanon, effectively placing the capital under siege.

Lebanese news sources said at least four people were killed in yesterday's fighting and a female bystander died of wounds sustained in the previous day's clashes. But information was scant as paramedics and security officials avoided areas of intense fighting that witnesses said resembled the scope of the all-out civil war that engulfed the country from 1975 to 1990.

By late night, US-backed government allies were calling for "dialogue" with Hezbollah even as fighting continued and allegations mounted that Shi'ite militiamen were raiding homes and offices of government supporters.

The violence came amid heightened regional tensions between the United States and Saudi Arabia, which strongly back the government, and Iran and Syria, which support Hezbollah and the opposition. The US blamed Hezbollah for the current unrest in Lebanon.

"Hezbollah needs to make a choice: Be a terrorist organization or be a political party, but quit trying to be both," US national security council spokesman Gordon Johndroe said yesterday. "They need to stop their disruptive activities now."

Tensions escalated Tuesday after the US-backed government voted to outlaw Hezbollah's communications network, which the group allegedly was expanding, and sack the Hezbollah-allied head of security at the international airport, who allegedly had begun harassing visitors suspected of political ties to the government.

The fiercest battles erupted following a televised speech yesterday afternoon by Hassan Nasrallah, the chief of the Shi'ite militia Hezbollah.

Nasrallah warned that the Lebanese Cabinet's decision to declare the group's fiber-optic system illegal was tantamount to a declaration of war and put the government squarely in the camp of Hezbollah's enemies, Israel and the United States, which consider the Shi'ite militia and political party a terrorist organization.

"This decision is first of all a declaration of war and the launching of war by the government . . . against the resistance and its weapons for the benefit of America and Israel," Nasrallah told reporters via teleconference.

Saad Hariri, leader of Lebanon's Sunni community and head of the parliamentary majority, appeared on television saying the government would ask the army to enforce the government's decision to uproot the telecommunications network and remove the head of airport security. "You say you don't want Sunni-Shi'ite strife and we don't want this to happen either," he said.

An analyst called the proposal a "small retreat" by Hariri's camp as the Lebanese Army lacks the strength or unity to confront Hezbollah or any other of Lebanon's major political groups. The army also coordinates closely with Hezbollah on security matters and has affirmed its support for "resistance" to Israel.

Supported by Iran and Syria, Hezbollah operates as a state within a state in Lebanon, with strongholds in southern and western Lebanon and southern suburbs of the capital. Its armed wing fought Israel to a standstill in a summer 2006 war. Although Hezbollah claimed victory in that conflict, the war upset Lebanon's fragile sectarian balance and precipitated an ongoing political crisis that has left the country without a president since November.