Iraq backs off in US-Iran conflict

Baghdad says it will look into any militant-backing 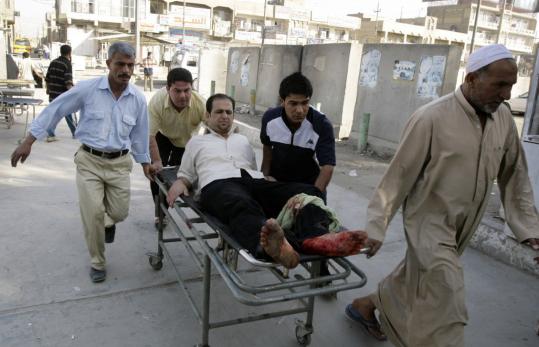 BAGHDAD - The Iraqi government backed away yesterday from accusations of Iranian interference, saying it had appointed a committee to determine whether there is merit to US charges that its eastern neighbor is arming and training Shi'ite Muslim militants here.

The sharp change in tone, after meetings with Iranian officials in Tehran, reflects the difficult position in which Prime Minister Nouri al-Maliki of Iraq finds himself as he attempts to juggle relations with two powerful allies who are intense rivals.

"We have no choice but to have good relations with the neighboring countries," said Maliki's spokesman, Ali Dabbagh. "We do not want to be pushed into a conflict with a country like Iran."

Dabbagh's comments came after US officials had trumpeted the discovery of large quantities of Iranian weapons, some of them manufactured in 2008. The purported finds have not been shown to the media. But if true, they would suggest that Iran had not kept a promise to Maliki to help cut the supply of arms, funding, and training to Iraqi militants.

With pressure building from the United States to confront Iran, Maliki's governing Shi'ite alliance last week dispatched a delegation to Tehran to discuss the evidence with senior Iranian leaders.

Iraq's national security adviser, Mowaffak Rubaie, and a spokesman for the Defense Ministry told the Los Angeles Times that Iranian-made weapons with manufacture dates of 2008 had been found in Basra during a crackdown last month on Shi'ite militias in the southern oil hub. Pentagon officials said they had also supplied the Iraqis with additional unspecified evidence.

Iranian leaders, who deny providing backing to Iraqi militants, were furious at officials here for publicly airing their concerns. Iranian Foreign Ministry spokesman Mohammed Ali Hosseini was quoted last week in the official Islamic Republic News Agency as "lambasting such undocumented and fabricated allegations," which he said were intended to "serve the policies of the occupying forces" - a reference to US troops.

Yesterday, Dabbagh told a news conference that the Iraqi officials who had made the accusations against Iran had acted irresponsibly, and that Maliki has appointed a Cabinet-level committee to investigate the assertions. Committee members include the commander of the Iraqi armed forces and the nation's ministers of defense, interior, and national security.

"We need to document this information . . . and prove whether such country is interfering or not," he said. "If there is real interference, or Iranian arming, then this is a dangerous agenda which is not accepted by the Iraqi government and should be discussed at the highest levels with Iran."

The announcement surprised US officials, who last week described the discovery of large quantities of Iranian munitions in Basra as an "eye-opener" for the Iraqi government. A senior military official in Baghdad acknowledged yesterday, "We were blindsided by this."

"My guess is that the group that went over to Iran was made scared," said the official, who spoke on condition of anonymity because of the sensitivity of the issue. "That's the only thing I can think of, why they would change their position, because they have seen the evidence."

In other developments here yesterday, President Jalal Talabani's wife, Hero Ibrahim Ahmed, escaped a roadside bombing that injured four of her bodyguards as her convoy sped through Baghdad, according to a statement from the president's office.

Gunmen in the northern city of Mosul pulled an Iraqi journalist, Sarwa Abdul Wahab, from a taxi and killed her.