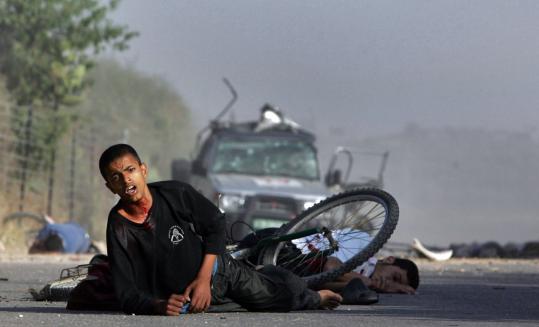 Palestinian youths lay on the ground after a missile struck the vehicle of Reuters cameraman Fadel Shana. Shana, who was filming Israeli tank movements, was killed in the strike, one of four missiles fired yesterday from an Israeli helicopter (MOHAMMED ABED/AFP/Getty Images)
Email|Print|Single Page| Text size – + By Diaa Hadid Associated Press / April 17, 2008

Among the Palestinian dead was a news cameraman.

The surge in violence came after a relatively quiet month and threatened to unravel an Egyptian effort to mediate a cease-fire between Israel and Hamas.

Yesterday's death toll was the highest since an Israeli military offensive in early March that killed more than 120 Gazans, including dozens of civilians. Since then, Israel and Hamas appeared to be honoring an informal truce, though punctuated with Palestinian rocket attacks, some Israeli air strikes, and border skirmishes.

In the day's deadliest attack, an Israeli helicopter fired four missiles at targets near the Bureij refugee camp in central Gaza, witnesses said. At least 12 Palestinians, including five children aged 12 to 15, were killed, said Dr. Moaiya Hassanain of the Palestinian Health Ministry.

Other cameramen who rushed to the scene said they saw the Reuters jeep on fire and Shana's body lying next to it. They said that his jeep was marked "press," and that Shana was wearing an identifying flak jacket.

As colleagues rushed toward the cameraman, another missile was fired, said Wissam Nassar, a photographer with the Maan news agency.

"There was an air strike," Nassar said. "We were thrown back, myself and another person."

Reuters Editor-in-Chief David Schlesinger called for an investigation into Shana's death. The Israeli military did not confirm its forces hit the journalist.

President Mahmoud Abbas of the Palestinian Authority condemned the "Israeli aggression in Gaza" and urged all sides to "cooperate with Egyptian efforts to reach a truce to halt the bloody cycle of violence." Abbas, who is visiting Moscow, has talks scheduled with President Bush in Washington next week.

Hamas spokesman Sami Abu Zuhri said the violence cast doubt on Egyptian cease-fire efforts. "There can be no discussion of a truce in the midst of these crimes," he said, threatening revenge against Israel.

Also yesterday, Palestinian militants ambushed an Israeli ground force in northern Gaza, killing three soldiers, the military said. The soldiers entered Gaza in pursuit of two Hamas militants who planted a bomb near the border and were ambushed by another Hamas force, Israeli defense officials said.

Other troops went in to the area and came under mortar fire from militants. The army said it responded with an air strike and hit militants in the Bureij area.

"The only logic here is that Hamas wants to sacrifice the civilian population of Gaza in order to advance its extremist and hateful agenda," he said.

The ambush was near the Nahal Oz terminal, used by Israel to pump fuel into Gaza. The fuel supply was cut off last week after two Israeli civilians were killed in a Palestinian attack on the terminal - the only source of fuel for Gaza.

Israeli officials initially said the fuel deliveries would be suspended further because of yesterday's ambush. But just hours after the attack, Israel resumed some shipments to Gaza's 1.4 million residents.

The fuel deliveries were expected to provide minor relief to the Gaza Strip, though they were only a tiny fraction of what the impoverished territory needs, Khuzandar said.

Israel has been cutting back on fuel and other basic supplies allowed into Gaza for months, trying to pressure the Hamas government to stop rocket attacks.

Hamas - considered a terrorist group by Israel, the United States, and the European Union - is committed to Israel's destruction. It seized control of Gaza last June from forces loyal to Abbas.

Israel hopes to reach a peace agreement with Abbas' West Bank government by year's end, as both sides promised President Bush last November. But Israel says it will not carry out any accord until Abbas regains control of Gaza.