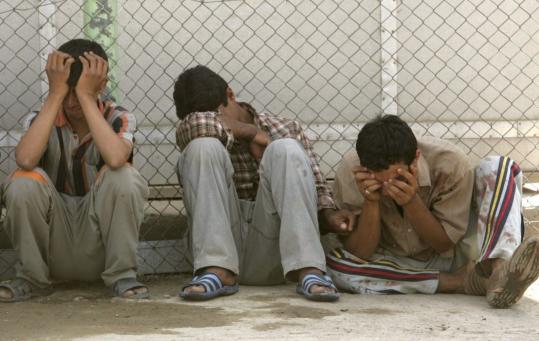 Residents mourned yesterday as they waited to claim the bodies of relatives killed during clashes in Baghdad's Sadr City earlier in the day. Authorities say dozens of people have been killed in the Shi'ite section of Baghdad since Sunday. (Kareem Raheem/Reuters)
Email|Print|Single Page| Text size – + By Ahmed Rasheed and Wisam Mohammed Reuters / April 10, 2008

BAGHDAD - Twenty-three people were killed and 83 injured in Baghdad's Shi'ite slum of Sadr City yesterday, security sources said, despite vehicle bans aimed at preventing unrest from spreading on the fifth anniversary of the fall of Baghdad.

Up to 73 people have died in Sadr City since Sunday in battles between black-masked militia loyal to cleric Moqtada al-Sadr and US and Iraqi troops.

Other parts of Baghdad were quiet, with streets clear of traffic because of a one-day vehicle ban in the capital for the anniversary of the day US troops rolled into the capital, deposing President Saddam Hussein.

Shops, government offices, and schools were shut and residents were allowed out only on foot.

Sadr had called a mass demonstration against the United States for the anniversary, but then canceled it, saying he feared for his followers' safety.

Many Iraqis spoke of the anniversary with bitterness. Retired army officer Salim Hussein said the past five years had yielded nothing but "blood, bombs, curfews, and in-fighting."

"The government is totally incapable of providing security," he said, walking near the square where US forces toppled Hussein's statue on April 9, 2003.

President Jalal Talabani, however, hailed the anniversary in a televised address as a day to be celebrated.

"April 9 will enter history as the day the most arrogant dictatorship Mesopotamia has ever witnessed was deposed, the fall of a political regime that . . . left behind mass graves that contained hundred thousands of innocents," he said.

President Bush, who is due to give a speech on Iraq today, spoke to Prime Minister Nouri al-Maliki by telephone.

Maliki launched operations against Sadr's militia last month in the southern city of Basra and fighting has since spread to Baghdad, where the cleric's Mahdi Army has clashed fiercely with both US and Iraqi troops.

US forces announced yesterday that four more American soldiers had died, raising the toll to 15 since the upsurge of fighting began Sunday.

Rockets or mortars, which US forces say are mainly fired from Sadr City, hit the Green Zone compound but caused no injuries, the US embassy said.

The Iraqi parliament's Human Rights Committee warned in a prepared statement of a "tragic situation" in Sadr City, where food and medicine are now running short after a two-week blockade.

In Fallujah, where members of Hussein's Sunni Arab minority rose up twice against US forces in 2004, several hundred protesters marched, calling for US forces to leave.